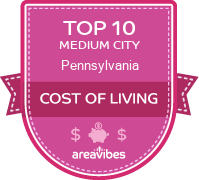 Whether you’re relocating to a new area to be closer to family, friends or for a new job, living in Wilkes-Barre could be a positive experience compared to other cities in Pennsylvania if you know where to look. With useful information like amenities, cost of living, education, housing and other key data points, finding the best places to live in Wilkes-Barre and in the areas around Wilkes-Barre is a much easier task.

Using data and statistics Wilkes-Barre has received a livability score of 60/100. This score is ranked in the 18th percentile when compared to all other cities. Compared to the national average, this area has a score which ranks among the lowest in the nation, and it is not considered a very livable city. For each of the livability categories, we know that Wilkes-Barre ranks very well for amenities (A+) and cost of living (B+). There is at least one category that does not have great scores in Wilkes-Barre. The following was graded with a concerning score: crime (F), weather (D), education (F), employment (F) and housing (F).

Conveniently located amenities and interesting attractions are a great way to continuously enjoy Wilkes-Barre on a regular basis. Knowing that there are an abundance of amenities and things to do can ensure that you always have access to nearby grocery stores, restaurants and coffee shops. Some of the notable things to do include: Mohegan Sun at Pocono Downs, Mohegan Sun Arena at Casey Plaza, and Chacko's Family Bowling Center.

Attractions10/10
Community10/10
Nightlife10/10
Dining10/10
Shopping10/10
Wilkes Barre is an incredible potential growing city in Northeast Pennsylvania just two hours west of New York City and two hours north of Philadelphia. Wilkes Barre has drastically changed throughout the years by building new developments, upscale shopping sites and keeps on upgrading every year providing the perfect town for those immigrating into the Diamond City
Wilkes Barre: The Good and the Bad

Attractions8/10
Community7/10
Nightlife7/10
Dining7/10
Shopping8/10
I lived in the Wilkes Barre (pronounced Wilkes Berry) area. In fact, I spent much of my adolescence there. One great thing about Wilkes Barre is that it's well stocked with a lot of shopping options. The Wyoming Valley Mall is huge and I spent a lot of time in the Bon Ton. There's a Barnes and Noble nearby, and my mom and I would go there and get coffee, enjoying our books.

Anyone who has relocated to Wilkes Barre to start a family will find lots of options for college, such as Wilkes University and Penn State Wilkes. I went to a few track meets at Wilkes University, and the school has an amazing athletic field. Some of my friends went there and their programs are also great. I don't know a lot about Penn State Wilkes, but joining the Penn State family is never a bad thing to do.

Wilkes Barre has a pretty plentiful downtown. There are lots of bars and shops to peek around in. Certain parts of town are definitely better than others, but safety is important no matter where you are, of course. As far as food, I'll never forget this Thai restaurant my family and I went to. It's called Thai Thai. Their pad Thai with chicken was the very best I've ever had. There's a movie theater right in that area too. We took my grandfather there one time and it was a pretty good day.

As far as attractions go, the biggest one I would have to say is Mohegan Sun. I went there with my grandfather and our family. I wasn't old enough to gamble, but there were plenty of things to do. The food at the casino is great. While my parents and grandfather were on the casino floor, my siblings and I checked out some of the shops.
Source: The Wilkes-Barre, PA data and statistics displayed above are derived from the 2016 United States Census Bureau American Community Survey (ACS).
Loading