Best Places to Live in and Around Tampa

See all the best places to live around Tampa

What do the locals think about Tampa?

Tampa is one of the largest cities in Hillsborough County, and is located on Florida’s West Coast. Situated on Tampa Bay, and near the Gulf of Mexico, close to 400,000 people call Tampa their home. The home and rental prices, plus the cost of living, are lower than the national average, making it an ideal place in which to move. The Tampa Bay Area is one of the largest metro areas in the county, and adds to the bustling feeling of the city.

If you are used to snow and ice, Tampa’s climate is much milder. It is warm and sunny during the spring and winter, but be prepared for humidity and lots of rain in the summer and the fall. The average year-round temperature is 60 degrees, though, so pack your bathing suit and rain gear!

Tampa has plenty of public transportation options, including streetcars and buses, and is nearby multiple airports and train stations. Consult maps if you think you will want to take these frequently. Those who like to travel by foot may like Bayshore Boulevard, a waterside walkway, or the River Walk, a pedestrian trail in Downtown Tampa.

There are plenty of attractions in Tampa. Downtown offers the Riverwalk, plus plenty of museums, cafés and shops. The Straz Center for the Performing Arts, which features shows such as nationally-known musical acts and touring Broadway performances such as Mean Girls, Dear Evan Hansen and Anastasia, is located nearby, so you can stroll and then experience dinner and a show. See animals at the Florida Aquarium, ZooTampa, Busch Gardens Tampa or on a dolphin cruise. Get a taste of history at the Henry B. Plant Museum and in Ybor City as you see buildings from a time gone by, cobblestone streets and plenty of roosters. If you love the outdoors, go to Lettuce Lake Regional Park or the Courtney Campbell Trail. End the day by taking in an NHL game at the Amalie Area, or by going out to eat for classic Cuban sandwiches, crabs, shrimp or another dish for which Tampa is known. If you are in the city in January, do not miss Gasparilla Pirate Day and Fest.

It is easy to get used to life in the Sunshine State. People are friendly, the weather is ideal and there are plenty of things to see and do. Southern hospitality meets modern amenities in Tampa. You can ask for directions, if you ever get lost, and know that others will return the favor. It is easy to know your neighbors here, but big enough to never feel a lack of job, cultural or recreational opportunities. Move there for a change of pace and a more relaxing lifestyle. 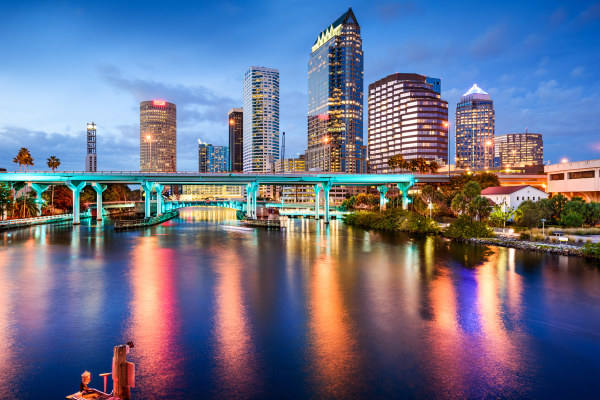 See the best places to live in & around Tampa

Write a review about Tampa Tell people what you like or don't like about Tampa…
Review Tampa
Getting very pricey
Attractions10/10
Community8/10
Nightlife5/10
Dining7/10
Shopping9/10
Tampa has great vibes and views, but I think what this site fails to take into consideration is how fast the housing and rent prices are increasing. Just as an example, my rent increased by 50% in the past 3 years of living here. Literally. This is because there are so many new people moving into the area, and it's not a cheap place to be despite not many jobs.
4 0
Bruce B. Downs Blvd - Tampa
Attractions10/10
Community10/10
Nightlife10/10
Dining10/10
Shopping10/10
Tampa's Bruce B. Downs Blvd - Dangerous Intersection: 25,000+ Viewsby Robert F. Sawallesh, US Army Retired, USF Family Member Please sign and support this free petition to make the James A. Haley Veterans' Hospital, iQ Apartments and USF intersection more safe to enter and exit. Google: . Over 25,000 views and 700+ signers. Active duty wounded and injured are treated at this Veterans hospital. USF students run and skateboard across this dangerous intersection. Please forward this Email to the USF and Veterans communities. To see video of this dangerous intersection go to YouTube and search "Sawallesh." Thank you! PS: Star rating for traffic engineering: Traffic engineering only receives half a star. A great community, otherwise to live in.
1 -5
Tampa City Florida: The Perfect Winter City
Attractions8/10
Community7/10
Nightlife6/10
Dining6/10
Shopping7/10
I spent a few years living in Tampa in my early twenties when I was trying to figure out what to do with my life. I like the heat so I thought this was the perfect place to get away from snowy, cold grim New Jersey. When I lived in Tampa after I relocated from grey Patterson, I felt as if I had come alive. I later left because my husband got a job in Boston, but we still happily go back to visit Tampa at least once every two years.

Anyone who is looking to move here should know that the city climate is hot. Not a little bit hot but really, really hot. It's also quite humid. So if you can't stand really warm weather, this is not the place for you.

But if you love to swim in winter and hate the cold, this is an awesome choice. Unlike Miami about two hours to the east, Tampa is not quite the big city. It's a big city for Florida but not by world standards. But it is fairly compact and easy to get around in. You don't have to worry about a place to park on most days.

Mostly this is a town where you can stay outdoors for much of the year, enjoy beautiful public beaches and be around nature. I've seen at least a dozen birds in any given trip. I've also been able to have my pick of local bathing spots. Try Indian Shores to spend an entire day on the boardwalk next to the sand and the sea. The beach is only a quick walk from the boardwalk. There's lots of fun games kids can play if they get bored.
5 0
Tropical & Historic Tampa, FL
Attractions10/10
Community8/10
Nightlife9/10
Dining9/10
Shopping7/10
Being from a small town in Tennessee I just didn't think a trip to Florida would be that big of a deal, but it was. Vacation time is for going somewhere new and I found that going from one Southern state to another could be like going to another world.

My daughter and I chose Tampa, Florida because of all the historic places nearby and in Tampa. The Ybor city district, which is a distinct neighborhood inside Tampa, Ybor has been declared a true National Historic Landmark because of the amount of historic places. One of the most beautiful buildings is the Old Tampa Bay Hotel and it is now a part of the University of Tampa. The building has huge arches and a very uncommon spire that you won't see just anywhere.

There are plenty of other tourist attractions such as Busch Gardens, Adventure Island and Lowry Park Zoo. Tampa also has over 2,000 acres of beaches just inside the city limits.

A variety of interesting food choices is available for every taste in this small part of tropical Florida. It isn't just the typical, touristy burgers, steaks and seafood. This is a place where you can satisfy a craving for the exotic, such as Cuban, Latin or authentic Greek cuisine which is what we did. Although the restaurant atmosphere is enjoyable you can enjoy most any meal outside on a patio or at the many sidewalks, table cafés.

Tampa is the fourth largest city in the Southeastern U.S. but like most Southern states you will experience all the down-home hospitality of a small town.
3 0
Tampa, FL - By the Beautiful Bay
Attractions10/10
Community8/10
Nightlife8/10
Dining8/10
Shopping8/10
If I ever move to Florida, I'll definitely choose Tampa, FL. I've vacationed there several times, and find it irresistible. This beautiful, modern city curves around Tampa Bay; the bridges and palm-tree lined avenues offer stunning views, and it's so close to the Gulf Coast, that it's a water lover's paradise. Sailing, fishing, watching gorgeous Gulf Coast sunsets, enjoying the plentiful fresh seafood, or just sitting by the water letting the breeze blow through your hair-there's always something to do and attractions to see in Tampa.

Yes, there are tourists in Tampa, and I can't complain because I've been one, but natives say that there are plenty of times during the year when Tampa is peaceful. The climate is great year-round, and Tampa is easy to reach by highway or air.
1 -1
Source: The Tampa, FL data and statistics displayed above are derived from the 2016 United States Census Bureau American Community Survey (ACS).
Loading