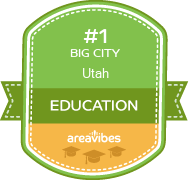 Provo is a moderately-sized city located in the state of Utah. The city has a population of 115,718 inhabitants. If we take a look at the last Census, the vast majority of the population falls within one racial group (89% White). Given that fact, Provo could be considered less diverse than other cities. With an average age of 24 years old, Provo could be a great place to live for young adults as this age is well below the national average. 86% of the people in Provo (over the age of 15) are married and 54% have kids under the age of eighteen. Knowing that, it’s safe to say that this area could be a great place for other families to lay down roots.

If you’re considering moving to any new city, it could be a very intimidating task. However, it could also be a positive experience if you are willing to get to know the area before actually living in Provo, Utah. With useful information like crime, weather, education and other key data points, finding the best places to live in Provo and in the areas around Provo is a much easier task.

Provo has a livability score of 76 out of 100 and is ranked #13 in Utah and #4,209 in the USA. Based on this score, Provo would be considered a very livable city! If we explore each of the categories on their own, we see that Provo ranks well for amenities (A+), crime (B+) and housing (B-). There is at least one category that did not score well in Provo. The following was graded with a discouraging score: weather (D) and employment (D).

Based on the proximity of local amenities like grocery stores, restaurants, coffee shops, parks, librairies, etc., Provo has received a higher than average score for its local amenities. If you’re planning on relocating and making this area your permanent home, it’s nice to know that there is an ample amount of amenities and things to do within walking distance or a short drive. Some of the interesting things to do and attractions include: Brigham Young University, Bridal Veil Falls, and Seven Peaks Resort Water Park.

Feeling a sense of safety in the area that you live in is a must for most people. Low crime rates can have a positive impact on things like home prices, home appreciation rates and the overall sense of community. Provo has a violent crime rate of 126 crimes per 100,000 residents which is far lower than the national average.

Based on multiple factors including: median home and rental prices, appreciation rates and home affordability, Provo has received high marks in the housing category. Based on these calculations, the apartment rental and real estate market appears to be very healthy.

Assuming that Provo meets all of your requirements, the next most important item to examine is the affordability of real estate in Provo. Everything else becomes a lot less important if it turns out that home prices in Provo are simply unattainable. Median real estate prices in Provo come in at $214,800, which is 4.4% lower than the Utah average. The home price to income ratio compares the median home prices to the median household income. In Provo, the home price to income ratio is 5, which is 38.9% higher than the Utah average. Knowing if your home will appreciate on a long term or even a short term basis should be factored into your decision making. An increase in your home’s value can be a good way to generate tax-free equity that can create long term financial security. In the past year, appreciation rates for homes in the Provo area were 12.9% and 5 year appreciation rates were 8.5%.

Write a review about Provo Tell people what you like or don't like about Provo…
Review Provo
Provo, UT - Pleasantly Surprised

Attractions9/10
Community9/10
Nightlife7/10
Dining7/10
Shopping10/10
In 2005, I made my first trip to Utah. I took a flight from JFK Airport in New York to Salt Lake City International Airport. I came over to visit my friend who studied at Provo's Brigham Young University, one of the biggest private schools in the country. He picked me up at the airport and we drove to the city of Provo along Interstate 15, which took about 40 minutes. It was a scenic drive, particularly at the end as we passed through a valley between Utah Lake and the Wasatch Mountains.

When we finally arrived in Provo, I was inspired by the modern campus of Brigham Young University (BYU), which is overlooked by the beautiful Wasatch Mountains. We actually watched a football game at the 65,000 seat capacity LaVell Edwards Stadium and cheered on the Cougars. There was a beautiful contrast between the peaceful mountain peaks and the tens of thousands of screaming fans.

During my trip to Provo, I quickly discovered the strong influence of The Church of Jesus Christ of Latter-day Saints in the city. BYU is actually owned and operated by this Christian denomination. I was equally amazed by the Provo Utah Temple, whose modern museum-like architecture blends in well with the surrounding mountains and clear blue sky.

Don't think that Provo is some backward community full of religious zealots. I discovered plenty of high technology and retail firms such as Action Target and Novell. Provo Town Centre is one of the premier shopping malls in the Salt Lake City Metro area, with anchor stores such as Sears and JCPenny. Provo's streets are full of modern commercial spaces and homes, and I would never have guessed that the city's history goes back to the mid 19th century.
Source: The Provo, UT data and statistics displayed above are derived from the 2016 United States Census Bureau American Community Survey (ACS).
Loading