In a tumultuous year of international setbacks during which the fast-growing economy of China has finally overtaken that of the United States, the downbeat news is unrelieved by a steady dribble of reports on the doubtful joys of living in major American cities that feature Mad Max crime rates, gleefully rude civil servants and other features from bad movies with inadequate budgets. Residents of these cities likely feel no particular urge to wave giant foam thumbs-up mittens that display fervent civic pride in their surroundings. Indeed, the outbound ramps on major highways near these metropolitan cesspools typically accumulate considerably more wear and tear than the inbound ramps.

For your amazement and relief at the fact that you don't live in any of these destinations for the doomed, the following list blurts out the top 10 worst cities in America with populations of more than 200,000 that are the worst places possible to plant your roses and park your quivering behind in the not-so-advanced year of 2014. 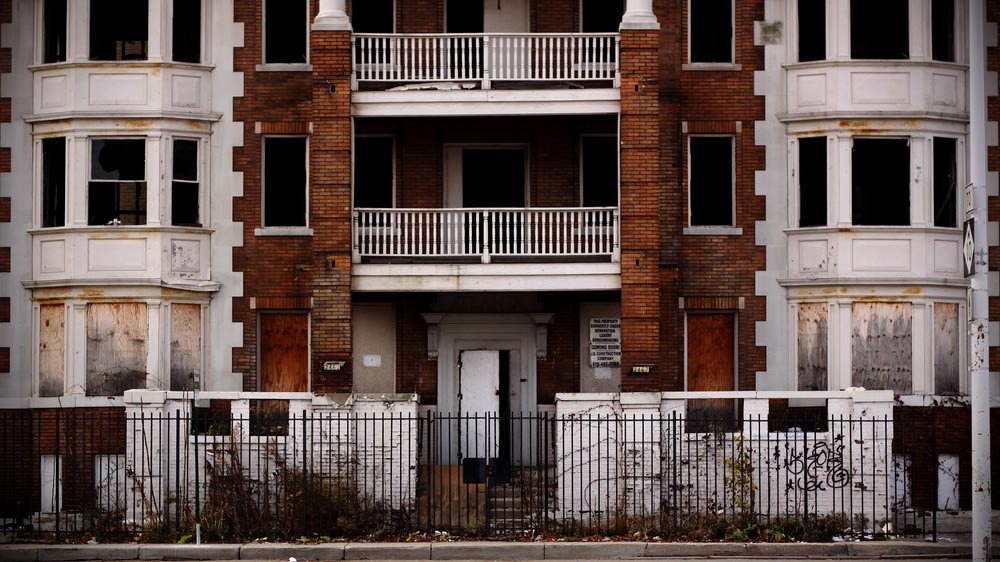 Once a paragon of the Great Lakes gang of teeming, factory-studded cities that rolled out miles of steel and unending armies of popular automobiles for a booming post-war America, Detroit has jumped up two spots since 2013 to stand supreme in the infamous Rust Belt as the country's foremost producer of criminal behavior that absolutely no one else wants. A crashing population of progressively poorer residents has relentlessly stamped the city's tax base into the dust, leading to charming outcomes such as the classroom bedlam of a disproportionate student-to-teacher ratio of 23 to one, the roar of dispirited bulldozer teams working to clear away hundreds of long-abandoned homes in weed-choked lots and the clamor of deeply unhappy creditors squabbling over just how bankrupt Detroit really is and how much money they can possibly recover from their ill-advised municipal-bond investments. If W.C. Fields were still with us, the cranky comic of yesteryear would exclaim loudly that he wouldn't be caught dead or alive in Detroit and would be shocked that Detroit has reached the top of the worst places to live list for 2014. Learn more about Detroit, MI. 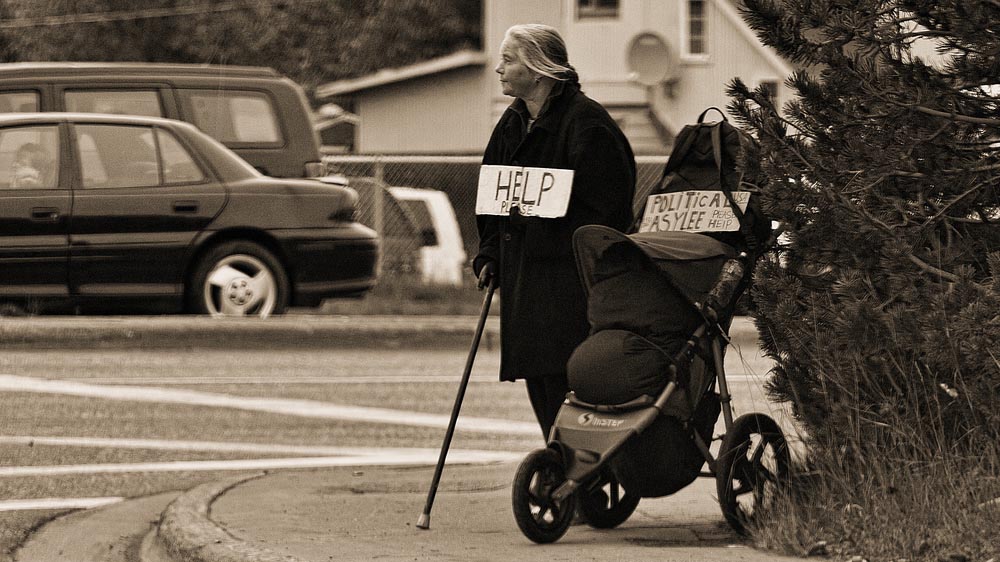 While the state of Alaska at large takes a distinct lack of pride in being known as the summertime home of mosquitoes so large that even hungry birds hesitate to tangle with them, the remarkably isolated enclave of Anchorage rises to the occasion with its own special miseries. Already justifiably saddled with a reputation for astoundingly expensive foodstuffs and ordinary household goods that must be laboriously shipped at considerable cost from the distant continental United States, the city nestles uncomfortably close to the chilly climes of the northernmost Arctic Circle. Long winters all too often mean an abundance of unplowed snow and the deadly traffic phenomenon of black ice, which sneakily waits under the snow for unwary tires and screaming drivers. This remote outpost of the United States, which has driven a sled-dog team from ninth place in 2013 all the way to second place this year, remains best left to the rough mercies of drunken loggers and insane gold miners. Learn more about Anchorage, AK. 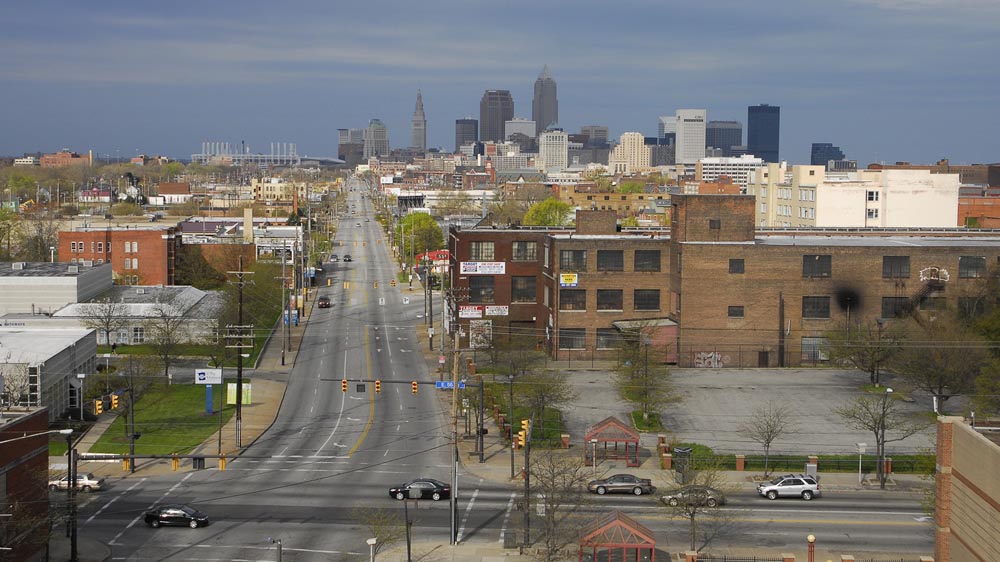 Singled out by appalled editors at Forbes magazine as an outstanding exhibition of the nope among barely habitable cities, Cleveland inflicts sky-high taxes, cesspool-level corruption and consistently unpleasant weather on its long-suffering residents. Adding insult to injury, the city's sports teams seem to perversely delight in patronizing the special club for inveterate losers. Unsurprisingly, many of the city's residential areas showcase genteel plywood windows and lush gardens of weeds that undoubtedly conceal entire families of raccoons and skunks, and truck-rental agencies continue to do good business with one-way bookings for other areas of the country. Cleveland stubbornly clings to its status as a major destination for residential wrecking crews and snickering journalists, which pretty much explains how it has slid on a puddle of dirty grease from seventh place on the top 10 worst cities list in 2013 to third place now. Learn more about Cleveland, OH. 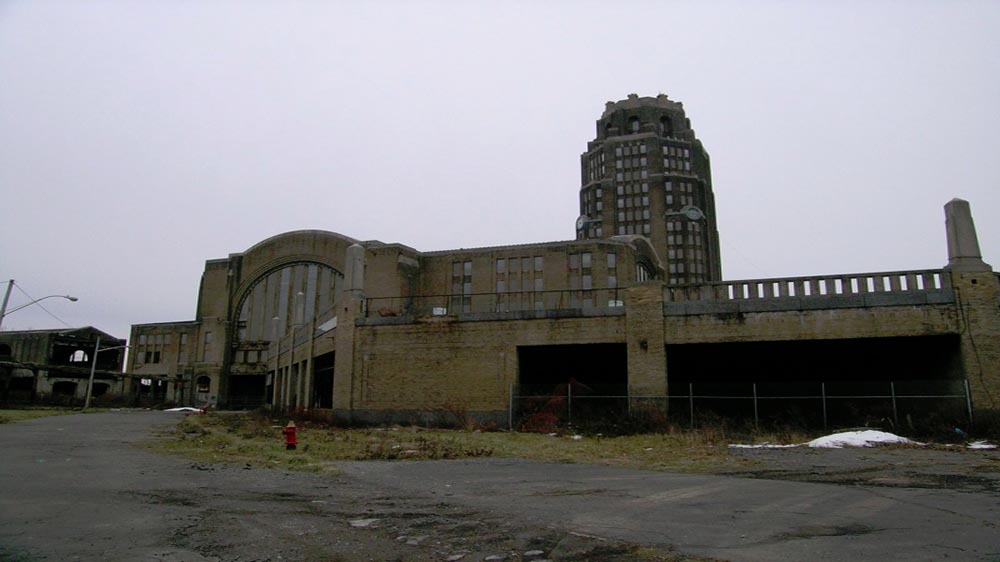 In spite of a name that misleadingly calls to mind the free-roaming buffalo of the Old West, Buffalo's position as a snow-buried wasteland of rusting factories and trapped residents has stayed firm over decades of a steadily falling population. By many accounts, the grinning politicians who claim to run this Great Lakes population center haven't been particularly shy about rooting about in a muck of corruption and a barely concealed disregard for the very real problems of the city's residents. A notorious study recently spotlighted Buffalo, New York, as sporting one of the smallest, most elusive herds of available jobs in the entire country, and reckless partying with illegal substances is depressingly prevalent among inhabitants who have seen forcible home foreclosures soar. The city's eye-popping leap from the tenth worst city in 2013 to the fourth worst city in 2014 accurately reflects an increased desire by seekers of the wild and free buffalo of the prairies to mosey on quickly to better regions. Learn more about Buffalo, NY. 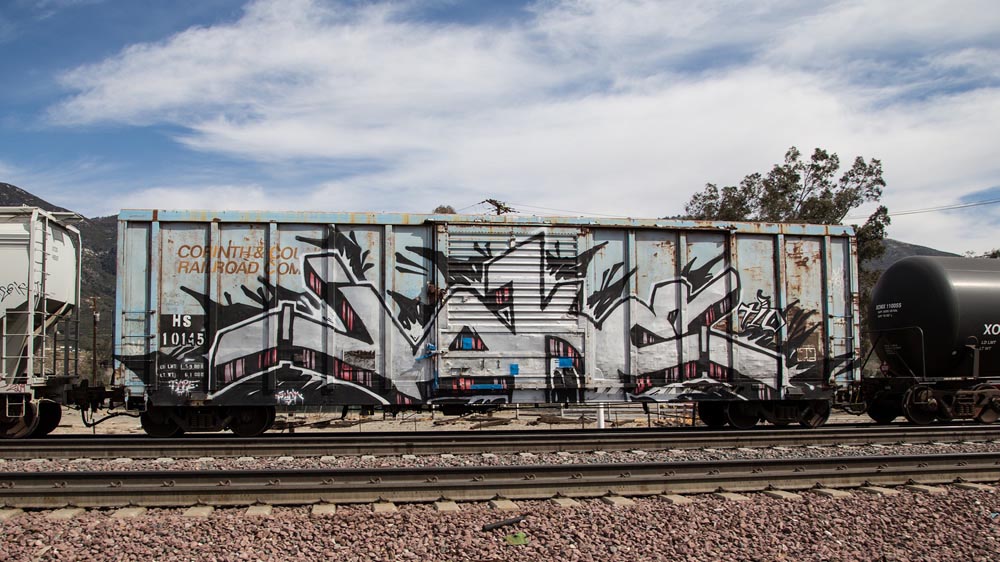 The growing pressures of a financially strapped California have helped to shape San Bernardino into a strong candidate for self-abusive residents who want the worst in living opportunities. Afflicted by surging slop-over from the infamous criminal gangs of the greater Los Angeles metropolitan area and a sluggish economy that has bitterly resisted feeble attempts at growth, San Bernardino, California, continues to stagger under the burden of a 2012 bankruptcy that saw police forces seriously depleted in the face of a strong rise in homicides and that left city leaders in a daze about where to go next. Teachers typically struggle with bumptiously large classes with few erasers and pencils on hand, and the classically sunny weather of Southern California does little to relieve a comedic outlook for economic recovery. The land of fruits and nuts offers much better places for gracious living than the slowly declining city of San Bernardino, which probably doesn't properly appreciate the honor of appearing for the first time on the list of the worst places to live in 2014. Learn more about San Bernardino, CA. 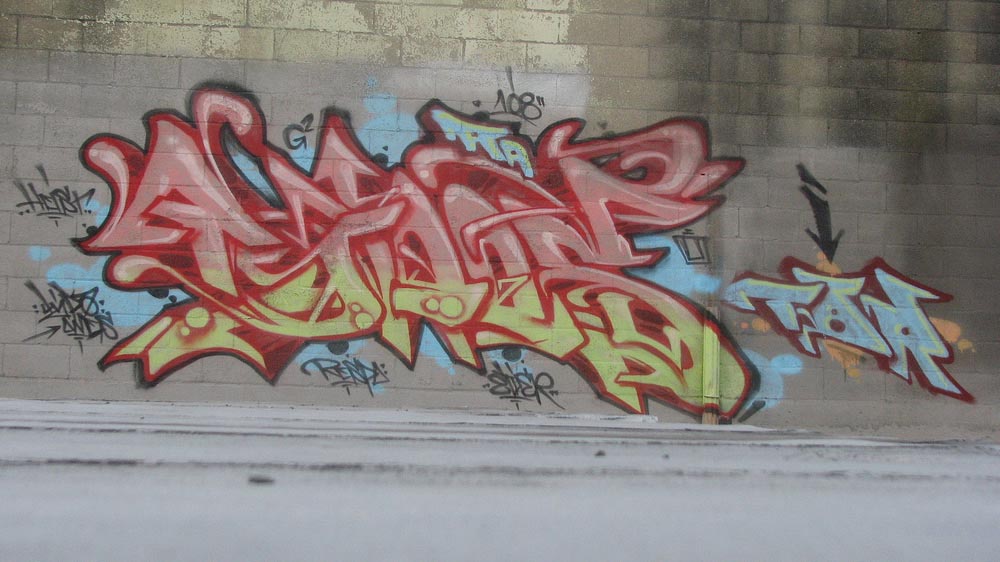 With an unusually high property-crime rate and a rich crop of amusingly large, automobile-wrecking potholes and sinkholes, latter-day Toledo has become quite tolerable for property-insurance agents and car-repair shops. Sadly, the great bulk of the quarter-million residents of this Midwest city find little joy in frequently narrow roads that produce exciting traffic encounters, bloated utility bills that drag down living standards and winter weather that leaves much to be desired for anyone but a penguin. Even the water, tapped as it is from Lake Erie, occasionally enlivens the lifestyles of residents; the summer of 2014 saw a poisonous algae bloom that forced inhabitants to slurp desperately at costly bottled water. This entertaining episode has helped to shove the unfortunate city onto the list for the first time to keep company with nearby Cleveland; overall, this paradise for broken asphalt serves best as a sightseeing opportunity while flying fast and far during a comfortable plane trip to anywhere but Toledo, Ohio. Learn more about Toledo, OH. 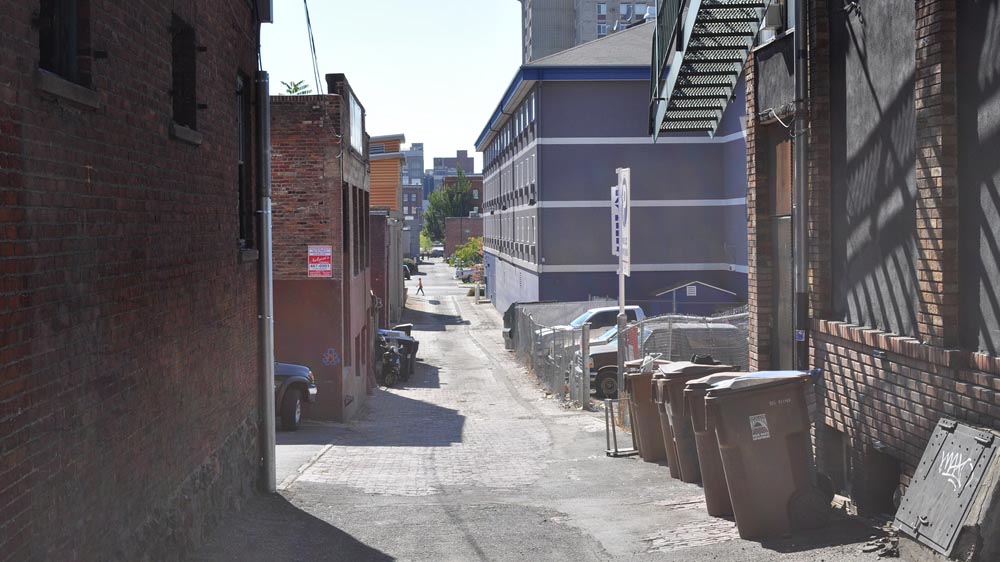 City leaders and others likely won't make surprised faces at how Spokane has joined the list this year. Criminals seem now to rule in the city, which reluctantly admits to a property-crime rate that soars 153 percent higher than across the rest of the state. Violent crime similarly struts its stuff at 132 percent higher than elsewhere in a generally peaceful state. Residents who successfully dodge muggers and car thieves may find themselves slogging heavily through marvelously snowy winters that make the bean counters at utility companies happy. Further contributing to a tenor of grumpiness is the habitual clip of high sales taxes on every purchase from dwindling household budgets. The best feature of Spokane, Washington, is the easy availability of empty hotel rooms for passing travelers who realize with a start of joy that they can and will leave forever in the morning. Learn more about Spokane, WA. 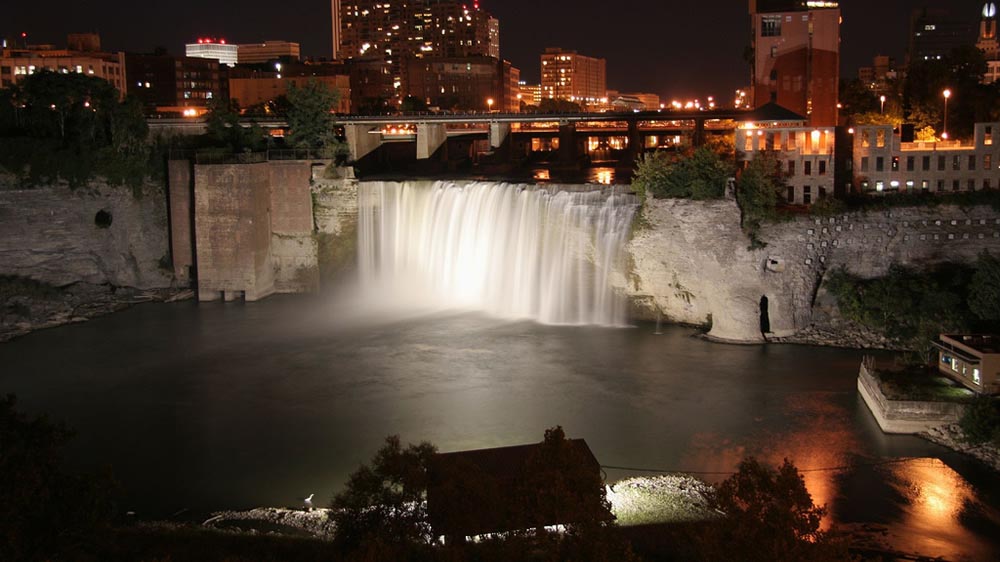 The lovely state of New York can now boast of two neighboring cities that jostle for higher rankings on a list of places that make dogs howl and residents save their pennies for a one-way trip out of town. Long nicknamed "Smugtown" by many exasperated residents and smirking outsiders, the home of noted 19th-century feminist Susan B. Anthony has finally achieved unmistakable renown. With a punishing property-crime rate that rises 148 percent higher than for the rest of the state of New York and a violent-crime rate that soars 145 percent higher, long time residents of Rochester, New York, tiptoe nervously around known gangland territories and blighted areas that even the cops don't want to enter at night without massive backup. The state's high property, sales and income taxes are amplified by additional levies at the county and city levels, leading to vigorous competition for the enviable position of the country's most heavily taxed metropolitan area. A rare bright spot is the ability to depart quickly for other states on several major highways. Learn more about Rochester, NY. 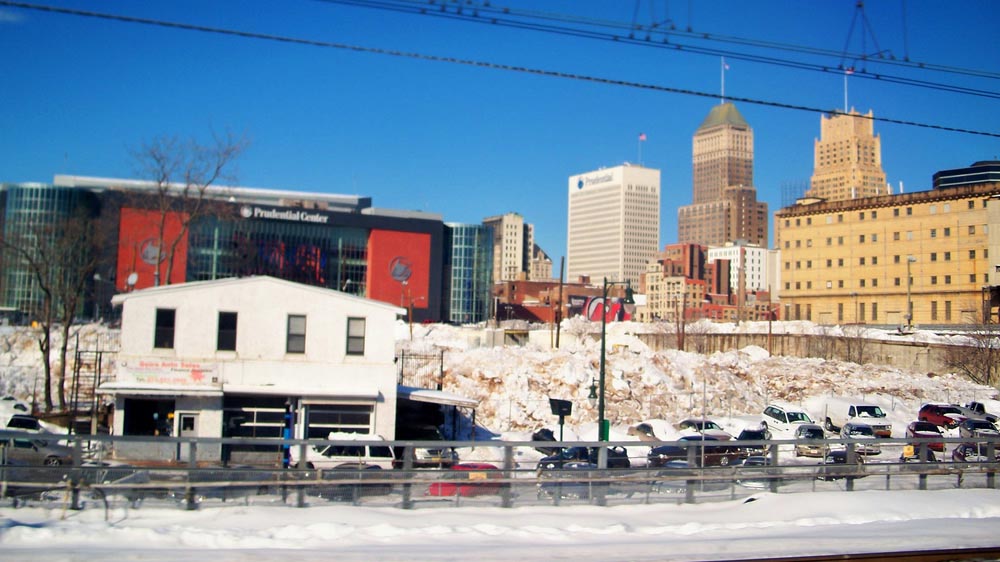 Many observers already consider New Jersey to be an armpit of a state that only gangsters and corrupt politicians could love, but Newark carries the theme further by providing free of charge to its residents a thuggish violent-crime rate that flies 335 percent higher than for the entirety of New Jersey. A heavy police presence relative to the national average does little to prevent a river of homicides, and the combination of a depressed economy and the high cost of living contributes to the delightful sensation of living in an urban wasteland. Few people would be displeased to see the admittedly all-natural griminess of Newark, New Jersey, flushed down a cosmic toilet in favor of a peaceful, unpolluted meadow populated by mooing cows. New to the list this year, Newark holds great potential to be a long-running competitor for first place on the list of the worst places to live in America. Learn more about Newark, NJ. 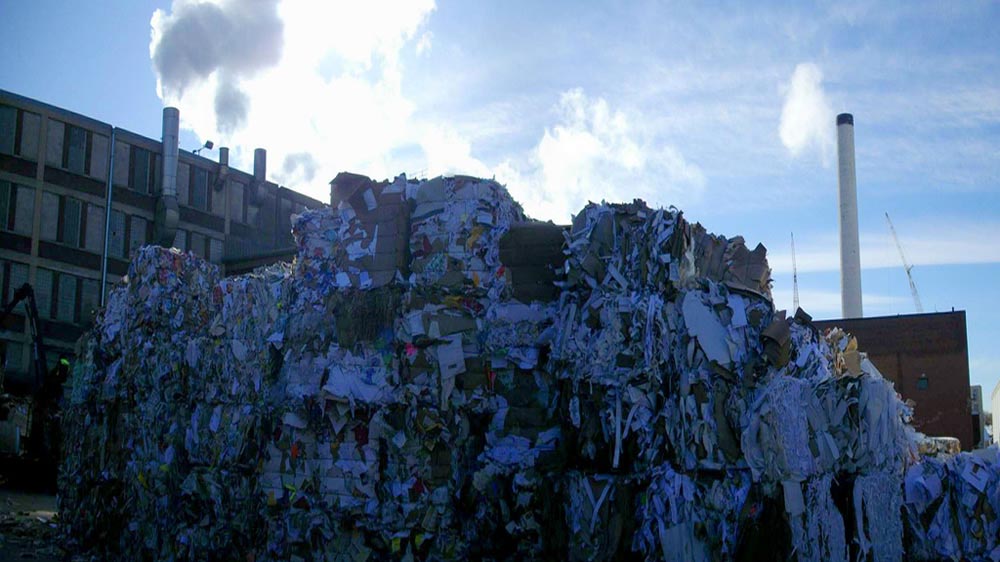 Gleeful chroniclers of dismal locales will be pleased to see another new entry for 2014. Muggers, burglars and others of the rumpled, unshaven brotherhood of casual disregard for life and property roam freely across the decaying landscape of Milwaukee, which sadly reports that its violent-crime rate rises an astonishing 386 percent above the rate for all of Wisconsin. A heavy police presence does offer the illusion of safety in several parts of town, though, and the weather is marginally tolerable a few times during the year. Apart from the fun of occasional, impromptu gunplay and frequent occasions for yelling at someone to come back with that purse or bicycle, the city offers wonderful opportunities for outdoor exercise to many inhabitants who tromp vainly from office to office in pursuit of empty promises of employment. All in all, Milwaukee is great for those who love to dream about moving far away. Learn more about Milwaukee, WI.