The debate between whether to rent a home or own a home goes on in many families in America. While both sides have their pros and cons, the decision usually comes down to a financial one. Is it more financially smart to own your own home or to rent someone else's? Financially speaking, both the average annual rent in the United States and the average home prices have continued to increase over the years. By looking at the rate in which each of these prices has risen over the years, it makes it easier for a family to predict what they will spend over a period of time. 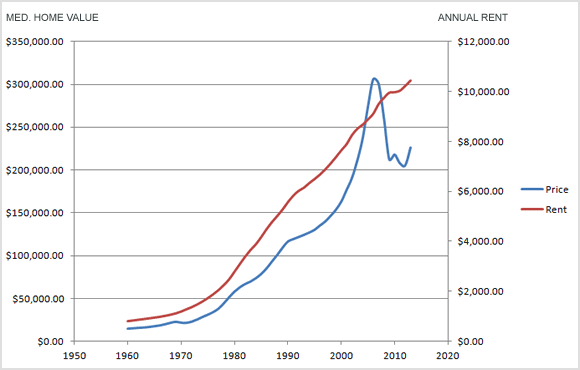 All in all, both sides end up paying relatively the same amount over a long span of time. While home owners have to take into account taxes and home repairs, after thirty years, their loans will be paid off and they will never have to worry about their monthly payment going up if they have locked into a rate. Inversely, while those who rent would never have to worry about taxes or home repairs, they would have to keep paying for the rest of their lives and depending on their rental agreement, could also have to worry about their monthly payment going up. Despite the fact that the monthly payments do not look that different, it is important to look at the long haul. While the statistics show that renting is less expensive and is increasing at a lower rate, people will always have a monthly payment, even as they get older when their income could substantially decrease when they are no longer working.

Who Lives Next Door? Prejudices By Generation, Gender & Political AffiliationDo you care who lives next door? Have we become less tolerant to who our neighbors? A closer look at who makes…misc2019-12-04
United States Stereotypes By StateWe investigate the most common assumptions over 1,000 people have about the cuisine, residents, and culture in…misc2019-12-04
The Flow Of Firearms In America – Comparing Gun Laws & State Gun ViolenceWith more gun laws, is gun crime decreasing? Which states have the most registered guns? Where are the guns…misc2019-12-04
The Tech Divide - Internet Access Across AmericaExploring the gap in Internet access across America…misc2019-12-04
Loading