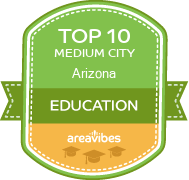 Best Places to Live in and Around Sun City

Sun City is a mid-sized city located in the state of Arizona. The city has a population of 39,363 inhabitants. The majority of Sun City residents report their race to be White; this is followed by Black and Asian. Sun City is considered to be a city with an aging population. The average age of all residents is 73, which is well beyond the United States median age average. If finding a family friendly city is important to you, look no further. With more than 88% of the population considered married and 99% with kids under the age of 18, Sun City could be considered a very suitable city for families.

Whether you’re relocating to a new town to be closer to family, friends or for a new job, living in Sun City could be a positive experience compared to other cities in Arizona if you know where to search. Finding the best places to live in Sun City and nearby areas is a much easier task when you can rely on information and data from the livability score, which includes crime, cost of living, employment, housing and other important metrics.

The livability score in Sun City is 72 out of 100 and the city is ranked in the 70th percentile of all cities across America. If we check out each of the categories individually, we see that Sun City ranks well for amenities (A+) and weather (B). There are some categories that Sun City scores poorly for, including: crime (F). It might be worth taking a closer look to figure out why.

There are many factors that go into deciding if an area is the right fit for your lifestyle. Certain “must haves” like low crime, great schools and nearby amenities are all at the top of most people's lists. But before even considering if those options are available, most people will need to know if the real estate in Sun City is actually affordable. Median real estate prices in Sun City come in at $119,400, which is 32.5% lower than the Arizona average. The home price to income ratio compares the median home prices to the median household income. In Sun City, the home price to income ratio is 3.2, which is 8.6% lower than the Arizona average. Real estate appreciation rates in Sun City are important to consider, as they can act as a guide to determine if your new home purchase will be a solid investment going forward. During the last twelve months, the appreciation rate for Sun City homes comes in at 9.3%, and the 5 year appreciation rates were 10.5%.

Check out the 10 safest cities in Arizona