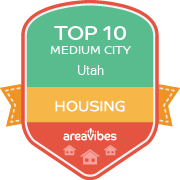 Located in the state of Utah, Spanish Fork is a moderately-sized city with a population of 37,565 people. The majority of Spanish Fork residents report their race to be White; this is followed by American Indian and Alaskan and Native Hawaiian. Spanish Fork tends to attract a younger crowd, as the median age of 25 is far below the national average. Spanish Fork has a high percentage of people who are married with children when compared to the rest of the country. In total, more than 86% of the population is classified as married and 36% have kids.

Without the right tools, relocating to any new area can be very stressful and challenging. Living in Spanish Fork, Utah could be a great experience for anyone who puts in the time to do the research required. The best areas in Spanish Fork and in surrounding cities are easier to find when you are able to make informed decisions. Using data from crime, weather, education, employment, housing, you will see a detailed breakdown of the most important information as well as comparisons to the Utah and national averages.

With a livability score of 76 out of 100, Spanish Fork is ranked #4,263 in the United States and #15 in Utah. Pack your bags! This is a very high score in comparison to other US cities. Living in Spanish Fork could be a great choice! If we dig a little deeper into each category within the livability score, we see that Spanish Fork has higher than average rankings for the following: amenities (A), crime (A+) and housing (B). Regrettably for Spanish Fork, there are some categories for which it does not score well, this includes: weather (D) and education (D).

Based on the proximity of local amenities like grocery stores, restaurants, coffee shops, parks, librairies, etc., Spanish Fork has received a higher than average score for its local amenities. If you’re planning on relocating and making this area your permanent home, it’s nice to know that there is an ample amount of amenities and things to do within walking distance or a short drive.

Feeling a sense of safety in the area that you live in is a must for most people. Low crime rates can have a positive impact on things like home prices, home appreciation rates and the overall sense of community. Spanish Fork has a violent crime rate of 56 crimes per 100,000 residents which is far lower than the national average.

Finding affordable real estate and apartments for rent in Spanish Fork can be tricky. Having said that, this area might be the place to get the best of both worlds. Based on factors like home/rental affordability and appreciation rates, this area has received an above average score in the housing category.

Being close to public transportation, grocery stores, parks and other conveniences are all important when weighing your options for a new home in Spanish Fork. Before you determine if any of these amenities are available in the area, you will also want to know if the real estate prices in Spanish Fork are affordable. The median home price for Spanish Fork homes is $204,300, which is 9% lower than the Utah average. If we take a closer look at the affordability of homes in Spanish Fork, we’ll see that the home price to income ratio is 3, which is 16.7% lower than the Utah average. Knowing if your home will appreciate on a long term or even a short term basis should be factored into your decision making. An increase in your home’s value can be a good way to generate tax-free equity that can create long term financial security. In the past year, appreciation rates for homes in the Spanish Fork area were 11.1% and 5 year appreciation rates were 8.4%.

Attractions4/10
Community8/10
Nightlife3/10
Dining3/10
Shopping8/10
Spanish Fork, Utah is a great place to live. Close to metropolitan Salt Lake City, you can enjoy professional sports (Utah Jazz, Real Salt Lake), attend college games (University of Utah, BYU) and spend time in the local mountains (it is close to Park City and neighboring resorts)! Spanish Fork hosts five large scale festivals each year that draw many visitors to the area: Fiesta Days, Icelandic Days, the Harvest Moon Hurrah, the Festival of Lights, and the Festival of Colors. With just under 35,000 residents, it is an up and coming city, attracting new business, shopping, and social activities. Located south of most of the Salt Lake City community, you can take advantage of the southern outdoor opportunities, like hiking, fishing, and exploring nature. Spanish Fork is a growing city and has many fun new restaurants and retailers. Once you visit our community, you'll find yourself wanting to stay and imagining your life tucked away in Utah Valley.
Source: The Spanish Fork, UT data and statistics displayed above are derived from the 2016 United States Census Bureau American Community Survey (ACS).
Loading