Best Places to Live in and Around Orlando

See all the best places to live around Orlando

What do the locals think about Orlando?

Situated in the middle of Central Florida, Orlando is the undisputed “Theme Park Capital of the World.” Millions of tourists flock to “The City Beautiful” every year to take advantage of its phenomenal amusement parks, sunny weather, and proximity to pristine beaches. Indeed, Orlando’s warm temps and world-class attractions are significant reasons many retirees and young families are moving into O-Town.

Walt Disney World will always remain Orlando’s top draw, but other big-name attractions include Universal Orlando and SeaWorld. If you’re a theme park lover, then living in Orlando will be a dream come true. A few other famous attractions within a short drive of Orlando include Cocoa Beach, the JFK Space Center, and Daytona Beach. Orlando residents also have easy access to superb golf courses, unparalleled dining, and massive shopping malls. Trust us, there’s plenty to keep you occupied in Orlando.

Despite its status as a hub for tourism, Orlando is not Florida’s largest city. Indeed, both Jacksonville and Miami are far more crowded than O-Town. So, while you should expect a big city atmosphere in Orlando, it’s not as densely populated as you might expect. Interestingly, the house prices in Orlando are very reasonable considering all of the city’s fantastic attractions and amenities.

As with most other metropolitan areas, Orlando has crime rates that are slightly above the national average. As a plus, crime rates in Orlando continue to decrease year-on-year, and they are far lower than other US cities like St. Louis or Detroit. Plus, since Orlando is so welcoming of international tourists, it has a robust police force. Honestly, you’re more likely to get injured driving on Orlando’s roads than in a violent altercation.

While we’re on the subject, keep in mind Orlando is far from a pedestrian’s paradise. Indeed, this city often ranks as one of the deadliest areas on earth for pedestrians and bicyclists. The combination of foreign tourists and speed demons make Orlando’s roads extremely treacherous. Please take plenty of safety precautions if you love cycling around town.

As we already mentioned, Orlando is blessed with year-round sunshine and temps that rarely dip below the 50°F mark. Get in the habit of drinking plenty of water and regularly applying sunscreen if you’re not used to hot & humid weather. On the downside, Central Florida frequently experiences powerful thunderstorms in the summer and fall. Indeed, hurricanes are an ever-present threat for Floridians between June and November. Wherever you live, you need to be sure you have a hurricane evacuation plan and comprehensive insurance.

As you’d expect, the primary industry in Orlando is tourism. People who are interested in a career in hospitality, media, and food services will find many job opportunities in the area. That doesn’t mean, however, you have to work for Mickey Mouse if you move to Orlando. Indeed, as Orlando’s population continues to grow, there will be a higher demand for health care workers. Plus, many big companies like Tupperware and Lockheed Martin have their headquarters in the Orlando area. 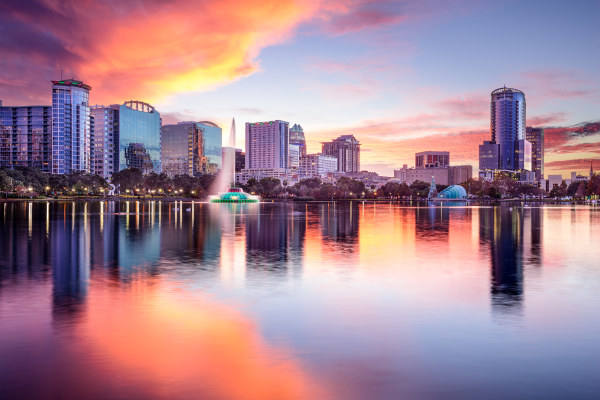 See the best places to live in & around Orlando

First of all, I was surprised how good the nightlife was. Universal CityWalk is a huge area dedicated to bars, restaurants and clubs. It will cost you about $20 to get in, but once you're in there's no cover at any of the bars or clubs and the drink prices are fairly reasonable compared to Miami and Miami Beach. If that sounds a little too childish for your taste, try Le Coq Au Vin (4800 S. Orange Ave). From gumbo to caviar, this gem has it does it all, and does it well.

For accomodations, I'd recommend staying at the Peabody Orlando Hotel (9801 International Dr). I picked it up for under $100/night, a steal considering the hotel is more like a resort. There's a huge outdoor pool area with a great patio. Loads of patio chairs and great service.

I did visit Universal Studios, but I was pleasantly impressed with the outcome of that visit as well. I hate lines, so I was dreading have to stand in the long lines while I waited to get on the rides. What I discovered is that theres a VIP line bypass that you can purchase for an extra couple bucks. At first you feel a little guiltly as you walk past the regular shmoes and immediately board the ride, but after a while you get accustomed to the VIP treatment. It literaly cuts your wait time by 90%!!!

Overall, I had a great time in Orlando and would visit again. It truly is the entertainment capital of Florida...
0 0
Orlando, FL - Disney, Universal and More!
Attractions10/10
Community10/10
Nightlife8/10
Dining8/10
Shopping9/10
My time in Orlando was filled with great experiences and friendly people. Orlando, Florida is a town that offers many atttractions and things to do. Of course, the most popular thing to do is to visit the Walt Disney world amusement park. The four theme parks that make up Disney cover the same amount of land area of Boston, Massachusetts. Disney World is a place that every child should visit at least once in their lives.

The great thing about Orlando is that it offers so many other choices for amusement, one of which is Universal Studios. Any movie lover will have a blast visiting Universal, which offers all sorts of rides based on their popular motion pictures. Universal Studios in Orlando also offers a great shopping and eating hot spot called City Walk, which is a great place to find nightclubs with big name acts performing. With a Hardrock Cafe and a Nascar Cafe, there are plenty of restuarant choices that will make the entire family happy.

Orlando is the place to come to experience the best amusement parks and entertainment in the world. You and your family will have a great time visiting Orlando!
1 0
Source: The Orlando, FL data and statistics displayed above are derived from the 2016 United States Census Bureau American Community Survey (ACS).
Loading