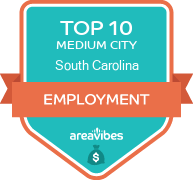 The best places in South Carolina

Attractions2/10
Community1/10
Nightlife1/10
Dining1/10
Shopping1/10
Are to looking to visit on vacation? Then your options include bed-bug ridden hellhole motels, poorly constructed townhomes next to trailers bought by out of state investors or a mediocre resort that'll cost you 2000+ a night (with nothing included). You'll spend an hour walking up and down an admittedly cute downtown area, and maybe rent a boat to go get eaten alive by insects. And that's about it. There's nothing to do here unless your a golf addict, in which case I'm sure you've already stopped reading my review.The place caters to a specific demographic of retiree. Specifically, the demographic with lots of money they are willing to piss away on nothing. The outlets all just carry cheap overseas made knock-off clothes that'll last two or three washings before they fall apart. The local restaurants are either filthy or just reheat frozen premade food. The barbeque joints are uninspired and overpriced. The bars are specifically to cater to the over-60-southener-crowd, with local sports and Civil War history making up a majority of their trivia nights. The local bands are laughably forgettable. And all the bars close at midnight anyway. Downtown becomes a giant speed-trap at about 11 pm, with the MPH changing every block or two and cops hiding around every corner. If someone does break into your house, the police are unlikely to even file a report, unless you get your insurance comapny involved, desperate to keep the crime-rate artificially low.Oh and be prepared to evacuate every August when a Hurricane hits. There's been one every year for the past four years, but the local's here don't trust things like climate science. Can we talk for a second about distrust in science? The grocery stores here literally pay people to get flu vaccines and no one will take them, with the flu season down here getting so bad you practically have to bar yourself in your house for a few months if you don't want to catch a cold. Of course that won't stop the bugs and other vectors, especially if you live in an HOA (which you probably will) that has some scammy committee members getting kickbacks under the table for one thing or another (I've heard "that's just how we do things here" from at least two different people). And if you take them to court? Well, it'll be at least a year of filing paperwork and paying court fees until the judge will even see you, at which point the other side is free to bring in a team of attorneys even if its small claims court...and if they are an "established business" you'd better believe no one in town will represent you...especially if the plaintiff is related to one of 12 families that "built this town".The roads are always falling into disrepair. The bridges around town are all structurally unsound and ready to collapse. The town is ready to slip into the ocean and...well, we won't be losing much.
Bluffton Is a Fraud

Attractions1/10
Community1/10
Nightlife1/10
Dining1/10
Shopping1/10
Five years ago, via the net, I discovered the cutest town: Bluffton. Unfortunately, the reality is not as cute. Those beautiful homes with the great low prices pictured on the net, in reality, are plastic dumps with zero construction standards. Entirely unlivable. There are no food handling regulations and the restaurants here will definitely make you sick unless you are already malnourished, obese and used to the filth. The locals are rude, crude, and uncouth. There is no such thing as an indoors voice; yelling is perfectly acceptable, anywhere. Even grocery shopping is a challenge. Bluffton shoppers see nothing wrong with parking themselves next to their cart and blocking all other shoppers access to products. And if you say "please excuse me", they have no idea you are even there. But if you move there cart out of the way, well they'll give ya what for. In fact, every social exchange I have had in the five years I have endured Bluffton, outside of workers being paid to be somewhat polite, has magically turned into a confrontation. I have been run out of three homes, had my car kicked in and my tires flattened. Bluffton, you win. I'm outta here.
Bluffton, SC is a Scenic, Lovely Place to Call Home

Attractions7/10
Community8/10
Nightlife6/10
Dining6/10
Shopping6/10
Bluffton, South Carolina looks like something you would see on a postcard or a watercolor painting of a pretty little small town full of charm. Everywhere you look there's something to see. Living in Bluffton is a real pleasure and it is mostly because of the wonderful people who live here. Everyone always has a smile and a wave. The schools could do with a little work, but the crime rate is low and the weather is beautiful and mild nearly all year long. The job market is healthy, and that is very important these days.

Bluffton is one of the best areas in the state for finding something to do nearly any time. Take a tour of the Tybee Island Light Station and Museum, the Palmetto Oaks Sculpture Garden, head out to Hilton Head for Zipline Hilton Head or enjoy Old Town Trolley Tours of Savannah. When you're all adventured out, enjoy peaceful living in a small, charming little town. There's lots to do and see in this great little place!
Source: The Bluffton, SC data and statistics displayed above are derived from the 2016 United States Census Bureau American Community Survey (ACS).
Loading