Best Places to Live in and Around Surprise

See all the best places to live around Surprise

What do the locals think about Surprise?

An aptly named city if ever there was one, Surprise, Arizona boasts a surprising number of interesting facts and cool things to do. It occupies over 300 square miles of land about 30 miles northwest of downtown Phoenix, part of the Valley's famed urban sprawl. It is the 2nd fastest growing and 9th largest suburb of one of the country's most rapidly growing cities in a state that was 2nd in growth in the 1990s.

Bordered by the White Tank Mountains to the west, Lake Pleasant Regional Park to the north, and situated in the Sonoran Desert, it's a hot-spot for outdoor enthusiasts looking for the best hiking, trail riding, boating, fishing, camping, and wildlife watching the state has to offer. Phoenix Metro is a Major League Baseball spring training mecca, and Surprise is arguably its Sanctuary. The city is home to Surprise Stadium, a hugely popular valley landmark. Both the Kansas City Royals and Texas Rangers left facilities in Florida to call the $48 million stadium their spring home. The city's aquatic center, recreation center, Passive Park, and beloved library are close by, and together comprise Surprise's downtown development.

Wait, there's more. There's a professional-grade tennis complex, authentic dude ranch, world-class golf courses, the Truman Ranch II citrus-picking farm, dog-friendly eateries, and prime shopping with one of the biggest and newest regional malls in Arizona. Eight months out of the year it puts on an outdoor music festival, and every December throws itself a birthday party featuring a carnival, car show, hot air balloons, camels, and mountains of food. The only downside is public transportation. The options are regrettably negligible, but to date that hasn't mattered enough to thwart growth.

Surprise had a humble beginning and was named after low expectations. Founder Flora Mae Statler once proclaimed she would "be surprised" if the one square mile amounted to anything. But it has, and will continue to do so. The city maintains its humility while churning out livability perks left and right. That it's quickly reached beloved status should come as a surprise to no one. 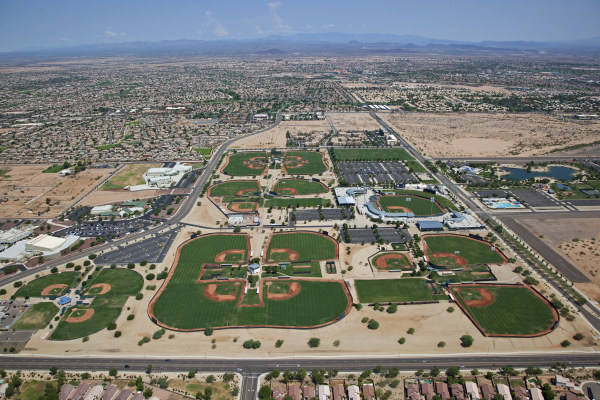 See the best places to live in & around Surprise

Write a review about Surprise Tell people what you like or don't like about Surprise…
Review Surprise
Surprise is a great place to live.
Attractions6/10
Community10/10
Nightlife4/10
Dining10/10
Shopping10/10
We love living in Surprise. There are a large variety of shops and restaurants. People are friendly and the atmosphere is nice. If you are looking to buy in the Phoenix area you can't go wrong with Surprise.
0 0
Surprise Law Enforcement
Attractions5/10
Community8/10
Nightlife5/10
Dining5/10
Shopping6/10
The city of surprise is a beautiful place. It would not be a good place to live however. They have a young eager police force. You are taking a BIG risk driving through the city of Surprise Arizona. You better watch out for the police. They are hiding around every corner, constantly pulling innocent victims over. Giving out tickets that cost huge bucks for any little thing they can find. I don't know if this is a big source of revenue for the city of Surprise, AZ or what. I know I am always highly paranoid with a death grip on the steering wheel while driving through the city of Surprise, AZ. I see the police always pulling people over, I wonder when they are going to get me. I was lucky for about a year, then suddenly, on Halloween night 2014, bam they got me. It was a darkly lit area coming out of a strip mall with my little daughter in her Halloween costume, just about to go trick or treat. I was making a left turn and wammo a big young eager police got me. I asked why I was pulled over and he said I made an illegal left turn coming out of the strip mall. Like I said it was very dark, there was no median and I did not see any signs posted. I let the young officer know and he pointed to a little tiny sign way high up on this light poll as he handed me a computer printed ticket from the mother ship. The ticket will cost me almost two hundred dollars. Wow, what a gut punch! Thanks City of Surprise. While I was pulled over I saw two other people pulled over in my vicinity at the same time. Can we say entrapment? The police have no remorse, they act like brainwashed robots. It seems like a military zone in Surprise, AZ but they are swarming the wrong folks. Just good people, trying to make it. It is a real shame, the city of Surprise is such a gorgeous city. My Advice is to stay away from the City of Surprise Arizona, there are nice little cities around it, unless you like getting BIG fines!