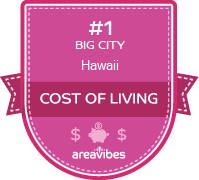 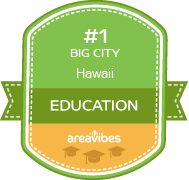 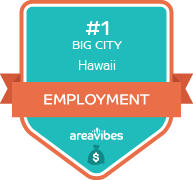 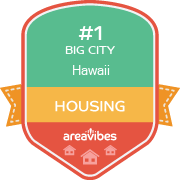 Are you trying to decide if living in Honolulu is the right fit for your lifestyle? To ensure a positive experience before moving to any new city in Hawaii, you will probably want to make sure that you check all of the most important boxes. Using the livability score which includes data from categories like crime, cost of living, weather, you can easily compare the best places to live in Honolulu and also determine if there are any nearby cities that might be a better match for your lifestyle. You can also compare Honolulu to Hawaii and the national average.

The livability score in Honolulu is 71 out of 100 and the city is ranked in the 69th percentile of all cities across America. If we examine each of the categories on their own, we see that Honolulu ranks well for amenities (A+) and weather (A+). There are some categories that Honolulu ranks poorly for, including: cost of living (F). It might be worth taking a closer look to find out why.

Location, location, location - possibly the three most important words in your search for a new place to live. Fortunately, in Honolulu, there is no shortage of amazing local amenities and interesting things to do. Some of the notable things to do include: USS Arizona Memorial/WW II Valor in the Pacific National Monument, Diamond Head, and Hanauma Bay Nature Preserve.

Unemployment rates can range pretty dramatically from one city to another. Knowing that Honolulu has an unemployment rate of 1.29% probably means that there are ample job opportunities for you to consider as it is far below the national average.

Certain items on your wish list like shopping, restaurants, nightlife and proximity to public transportation are all important factors to search for. Having said that, perhaps the most important metric to consider when contemplating a move to Honolulu is real estate affordability. Median real estate prices in Honolulu come in at $601,500, which is 11.7% higher than the Hawaii average. The home price to income ratio compares the median home prices to the median household income. In Honolulu, the home price to income ratio is 9.5, which is 26.7% higher than the Hawaii average. Real estate appreciation rates in Honolulu are important to consider, as they can act as a guide to determine if your new home purchase will be a solid investment going forward. During the last twelve months, the appreciation rate for Honolulu homes comes in at 4.9%, and the 5 year appreciation rates were 5.6%.

Best Neighborhoods In & Around Honolulu, HI

Attractions10/10
Community9/10
Nightlife10/10
Dining10/10
Shopping10/10
I currently live in Honolulu. Previously I lived in Los Angeles for all of my life, and the difference is astounding. I love the family culture here and the dedication to Hawaiian history. Being in the city is very fun because all of the tourist attractions are on this part of the island. One of the best places to shop is the Ala Moana mall, because it is absolutely huge. In addition to the lively city life, the temperature never drops below 70 degrees and if it gets a little hot, the trade winds never fail to cool me down. Whenever I meet someone new in town, I'm always greeted with a smile and a shaka. And to make things even better, there's a huge entertainment scene during the evening, so I never run out of things to do when the city lights turn up. In particular, I love checking out the music at Rumfire in Waikiki.

While there are so many positive things to say about Honolulu, the only negative aspect I have to talk about is the traffic. Since it's an island, there's really only one freeway and it gets congested very easily. Attempting to drive from one side of the island to the other can become a really long mission depending on the time of the day. Moreover, since it's a small island, traffic can get people on edge very quickly, so road rage can be a bit of an issue. However, if you're a laid back person that's okay with sitting in some traffic in paradise, it's no problem.
Home sweet home is pricey!

Attractions8/10
Community9/10
Nightlife7/10
Dining7/10
Shopping7/10
I love living here, it's my home and my comfort zone. But because my family and I are middle class ppl and not at all wealthy we rely on each other to make ends meet. We don't get to go on yearly vacations outside of the island because it would be ridiculously expensive on just our flights alone, not including spending money/hotel/transportation. I've stayed in Houston,Tx for a yr and Baton rouge, LA for another and even though I was working minimum wage I was able to support myself, have spending money, and have a 2bdrm apt with 2 bthrms and my all-time favorite HUGE walk in closet.

Recently my dad hasnt been working for 6 months due to his cancer treatments, and my mom would miss a lot to take him to appts and stays home on his "bad days". Why I'm mentioning this is because, like ive said in the Beginning of my comment, we ALL put in our share to live comfortably enough in middle class, but because of an illness that no one could have predicted it puts a strain in our finances.

Honolulu is lovely. Lots of out doorsy things to do, delicious foods, n wonderful community. Just expensive. Must have money on the side for emergencies! On this site gas says about $4. I'm a national guardsmen so I get my gas cheaper than civilian pumps and I pay about $4.30. Maybe, and that's a big maybe, i was single or me and my husband didn't have children we wouldn't need a bigger place (more rent/electricity bills), a car (reg/safety check/insurance/car note/gas). A small apartment would have done us ok and the bus here is really good, I could buy an adult bus pass for $60/month. But traffic is terrible and worse when there are accidents especially on the freeways.
Honolulu, Hawaii - Something Different Every Time

Attractions8/10
Community9/10
Nightlife8/10
Dining8/10
Shopping9/10
I have been to Honolulu and the island of Oahu a handful of times and each time I visit, I try find something different to see. While most tourists will venture out to the Pearl Harbor and Waikiki Beach, there are some hidden treasures that aren't always visited.

For first time visitors, I think it's important to make time to visit the USS Arizona Memorial at Pearl Harbor. Granted it's the most popular tourist destination in the island but it's the most significant area on Oahu in terms of American history.

Waikiki Beach is arguably the best and most popular beach in the world and there is no question why. From the white sandy beaches, the moderate temperature of the ocean water and the stunning background of Diamond Head, if you are in the Honolulu/Waikiki area, you will no doubt have a chance to at least get a glimpse of the scenic beauty of the beach. My one and only experience surfing was performed right at the main beach area and am proud to say that I was able to stand and ride almost all the way to the shore on my 2nd attempt!

Also in the Honolulu/Waikiki area, I enjoy visiting Hanauma Bay, known for its great snorkeling, the International Market Place and the Iolani Palace. But one of the best places to go for the best panoramic view of the city is at the very top of Diamond Head. It doesn't appear to be free any longer but at just $1 for pedestrians, it is one of the best bargains you can find. The hike up to the top is about one mile, but it can be difficult so I wouldn't try to make that hike unless you are in good physical condition.
Honolulu - More than just Waikiki

Attractions9/10
Community7/10
Nightlife9/10
Dining9/10
Shopping9/10
Honolulu is Hawaii's largest city. Home to not only a major international airport but also major military installations, it is a global trade and business center serving as a bridge between the Americas and Asia. It's also home to a pretty awesome beach. Waikiki is everything that one would expect--it's long, white, and beautiful. And, yes, you can surf there. The main strip provides its fair share of Honolulu restaurants, shopping and nightlife. I've traveled to Honolulu countless times for pleasure and business and have always enjoyed myself and strongly believe that any trip to Hawaii would be incomplete without a stop in Honolulu.

That being said, Honolulu is a big city and has big city problems. Outside of the touristy areas, it can get rough and ugly. Traffic can be extremely bad, with the freeway moving at a snail's pace almost all day, and the streets can be tight. Many of the hotels are older and in need of renovation, as well. All of this can be forgotten when one sits at a beachside bar or restaurant at the Royal Hawaiian and watch the surf while drinking a mai tai from a hollowed-out pineapple.
Source: The Honolulu, HI data and statistics displayed above are derived from the 2016 United States Census Bureau American Community Survey (ACS).
Loading