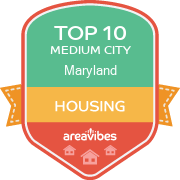 Attractions2/10
Community4/10
Nightlife3/10
Dining3/10
Shopping3/10
East Riverdale is a small community off of the Baltimore Washington Parkway, commonly referred to as the BW Parkway. The best thing about living in East Riverdale is being so close to this major roadway. You can get to Washington, D.C. in about 5 minutes via the Parkway. It's very convenient for commuting to work or whatever's going on in surrounding areas. Traffic can be a headache though!

Housing in East Riverdale consists of apartment complexes, condominiums, and small houses. Residents are mainly working class and typically easy going and friendly. The overall cost of living including rent or mortgage is pretty affordable. Lots of families with small children live in this area and the schools are decent. It's not considered a dangerous area but criminal activities do occur.

Small shopping centers and fast food restaurants are the bulk of what's available in the area. Neighboring towns like Hyattsville have more in terms of shopping and entertainment. Many others like College Park are just a few exits away on the Parkway. The District of Columbia is a hop, skip and jump away for fine dining, great shopping, nightlife, and touristy stuff. The best areas in East Riverdale are in some of the neighborhoods off of Riverdale Road.
Source: The East Riverdale, MD data and statistics displayed above are derived from the 2016 United States Census Bureau American Community Survey (ACS).
Loading