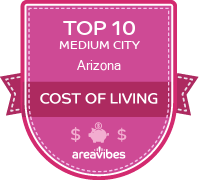 Best Places to Live in and Around Bullhead City

Bullhead City, Arizona is a mid-sized city with a population of 39,653 people. The majority of Bullhead City residents report their race to be White; this is followed by Black and Asian. Based on an average age of 51, Bullhead City appears to be a city better suited for seniors or retirees as the average age is well above the national average. Bullhead City is known to be family friendly as more than 70% of the population has already tied the knot. It might also be worth noting that 78% of residents also have children under the age of 18.

Living in Bullhead City can be a positive experience for anyone relocating to the city. Having said that, in the state of Arizona, there are many amazing places to live, so choose wisely! Finding the best places to live in Bullhead City and nearby areas is a much easier task when you can rely on information and data from the livability score, which includes amenities, crime, housing and other important metrics.

Bullhead City has a livability score of 70 out of 100 and is ranked #113 in Arizona and #10,613 in the USA. Based on the scores for each individual category, Bullhead City has been rewarded with high marks for amenities (B), cost of living (B+), weather (B) and housing (B-). On a more negative note, Bullhead City does not have favorable ranks for the following: education (F) and employment (D-). If we take a look at the data, we can find out why.

Feeling a sense of safety in the area that you live in is a must for most people. Low crime rates can have a positive impact on things like home prices, home appreciation rates and the overall sense of community. Bullhead City has a violent crime rate of 92 crimes per 100,000 residents which is far lower than the national average.

See the best places to live in & around Bullhead City