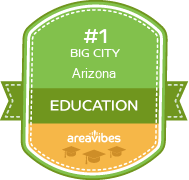 Best Places to Live in and Around Chandler

See all the best places to live around Chandler

Located in the state of Arizona, Chandler is a large city with a population of 242,131 residents. Chandler has a population density of 3,727 people per square mile. This would be considered well above the national population density level. According to the most recent Census, 77% of Chandler residents are White, 9% Asian and 5% Black. 76% of the people in Chandler (over the age of 15) are married and 51% have kids under the age of eighteen. Knowing that, it’s safe to say that this area could be a great place for other families to lay down roots.

Living in Chandler can be a fulfilling experience for anyone moving to the area. Having said that, in the state of Arizona, there are many desirable places to live, so choose wisely! With useful information like crime, cost of living, weather, education, housing and other key data points, finding the best places to live in Chandler and in the areas around Chandler is a much easier task.

Chandler has a livability score of 84/100 and is ranked #4 in Arizona and #532 in the USA. Compared to the United States average, Chandler ranks among some of the best places to live in the country! The cherry on top is that Chandler also ranks in the top 10 percent of all cities. Based on the rankings for each individual category, Chandler has received high marks for amenities (A+), crime (B), weather (B+), education (B-) and housing (B). There is at least one category that did not score well in Chandler. The following was graded with a concerning score: cost of living (D).

Based on the proximity of local amenities like grocery stores, restaurants, coffee shops, parks, librairies, etc., Chandler has received a higher than average score for its local amenities. If you’re planning on relocating and making this area your permanent home, it’s nice to know that there is an ample amount of amenities and things to do within walking distance or a short drive. Some of the interesting things to do and attractions include: Rawhide at Wild Horse Pass, Just Roughin' It Adventure Company, and Aji Spa at the Sheraton Wild Horse Pass Resort & Spa.

Based on multiple factors including: median home and rental prices, appreciation rates and home affordability, Chandler has received high marks in the housing category. Based on these calculations, the apartment rental and real estate market appears to be very healthy.

Being close to public transportation, grocery stores, parks and other conveniences are all important when weighing your options for a new home in Chandler. Before you determine if any of these amenities are available in the area, you will also want to know if the real estate prices in Chandler are affordable. The median home price for Chandler homes is $248,500, which is 40.5% higher than the Arizona average. If we take a closer look at the affordability of homes in Chandler, we’ll see that the home price to income ratio is 3.3, which is 5.7% lower than the Arizona average. Purchasing your new home can come with many financial benefits, some of which are more lucrative than others. Perhaps the most notable benefit could be the appreciation of your new home. Home appreciation rates are a good way to generate tax-free equity on a long term basis. The year over year appreciation rates in Chandler were 7.5%, and the 5 year appreciation rates came in at 6.6%.

Check out the 10 safest cities in Arizona