Best Places to Live in and Around Hollywood

See all the best places to live around Hollywood

What do the locals think about Hollywood?

Using “Diamond of the Gold Coast” as its nickname, Hollywood in Florida's Broward County is located between Miami and Fort Lauderdale. It is a major city of Miami's metropolitan area, and is the twelfth-largest city in the state.

Hollywood has approximately five to six miles of Atlantic Ocean beachfront as well as seven golf courses, 60 parks, and a delightful average temperature of between 68 and 83 °F. Founder Joseph Wesley Young created his own “Dream City in Florida” in 1920 with a vision including the beautiful Atlantic Ocean beaches, man-made lakes, the Intracoastal Waterway, large parks, golf courses, schools, churches, roads, and infrastructure.

Hollywood Beach, named Fodor's "Best Beach for Families," has a Broad-walk, which strolls for 2½ miles along the Atlantic Ocean. The pedestrian promenade is used for walking, jogging, and has a bike lane for bicycling and rollerblading. It is lined with hotels and restaurants, outdoor cafes, a theater, ice cream parlors, bicycle rental shops, souvenir shops, a children's playground, and a farmer's market.

The Great Southern Hotel was constructed in 1924 by Joseph Wesley Young and was in Young Circle between Harrison Street and Hollywood Blvd. It was one of two remaining hotels of the four built by Young. However, on February 11, 2020, it was demolished by the developer after the city determined there were unsafe conditions. Thankfully, a new life is ahead for parts of the landmark hotel because two walls, an interior section, and the facade will be spared, preserved, and incorporated into the new 19-story $80 million high-rise 229-apartment tower also with offices and shops that will be going up there in downtown Hollywood.

The Anne Kolb Nature Center was named for an environmentalist who was instrumental in saving the coastal West Lake Park's 1,500+ acres of coastal mangrove wetlands mangrove wetland from being developed. This is one of Florida's largest urban parks with native vegetation and wildlife, which includes many endangered and threatened species. The Center also features three miles of nature trails, a 68-foot five-level observation tower, a 3,500-gallon aquarium, and an exhibit hall with displays.

Sawgrass Mills is the largest value outlet and retail shopping destination in the nation with over 350 stores. There is luxury-brand outlet shopping at 70 exclusive stores and everything including jewelry, beauty products, home accessories, electronics, toys, sporting equipment, and more from a large selection of top brands.

Deluxe and Ultimate Distillery Tours and Tastings are at ZIAMI Distillery at 3030 N 29th Ave in Hollywood just minutes from Port Everglades and the Ft. Lauderdale Airport. Guests have a 20 to 40 minute guided tour of the distillery, find out how ZÍAMI Rum is made, and have a rum tasting, additional cocktails, and available souvenir items. ZIAMI Distillery produces a craft rum made from Florida-grown sugar cane and other local ingredients. 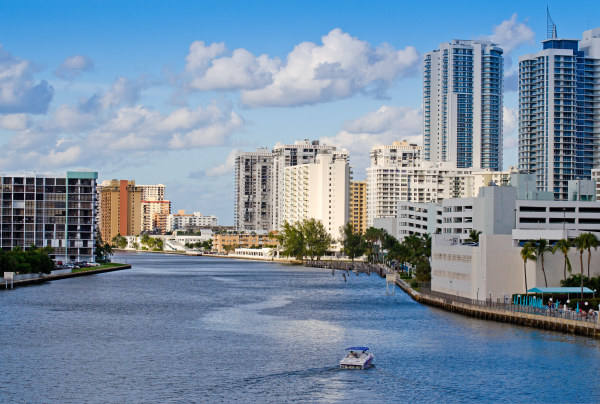 See the best places to live in & around Hollywood

Attractions6/10
Community5/10
Nightlife5/10
Dining5/10
Shopping4/10
Don't go to Hollywood Beach Resort, they have parking meters that you pay to park and enter your license plate and it does not print ticket, then they put boots on your car saying that it's not their fault the machine does not print or you should have called phone # of company that is NOT on machine. Even though they have a record of money being paid. This is bad for community having scams like this, it is bad for tourism and should not be allowed. Go down street to margarita Ville hotel, you will save $65 and a big hassle. I'm telling everyone so that they can not get scammed by Premier Booting services, company hired by Hollywood Beach Resort.
Hollywood, FL - All About the Westin Diplomat Resort and Spa!!!

Attractions8/10
Community8/10
Nightlife7/10
Dining7/10
Shopping8/10
If you even end up in Hollywood, FL you have to stay at the Westin Diplomat! The hotel was rebuilt in 2002 and is spectacular. It is pure luxury. The minute you enter the hotel you are amazed at the size of the lobby/sitting area, it is huge. The hotel is definitely modern and has all the amenities you'd expect. The rooms are larger than most and have great bedding. The room was also very clean. The best part of the rooms was the view. We were lucky enough to get a room facing the ocean, which was amazing, especially since we were 25 stories up.

The pool area is truly unique. Outside you will find a double decker pool, which is essentially two pools layered over each other. There is also an outdoor restaurant / bar which serves up some tasty snacks. Be warned, the food and drinks are not cheap. Just past the pool area is the beach, with some loungers that can be rented.

If you're looking for some nightlife, Nikki Beach is located right across the street, within walking distance. Or you can venture down to Miami Beach which is only a 20-30 minute drive.
Hollywood, FL - Fun in the Sun!

Attractions9/10
Community8/10
Nightlife8/10
Dining8/10
Shopping9/10
In the Summer of 2009 several girlfriends and I spent three weeks in North Beach, Hollywood Florida. At the time we were just a bunch of friends looking to travel and to get out of Nashville. Once we arrived in Hollywood, FL we never expected to see the beauty that our eyes saw. Hollywood is truly held up to its name sake the view from our hotel "The Riptide Patio and Tiki bar" on North Surf Rd. The view was absolutely breath taking. We went to North Beach Park there was a small cost to get in but worth the eight dollars for all of us. We did have a little trouble locating an affordable restaurantnear the beach. Taverna Opa was the first place we tried; the food was not all that great and the prices could have been more reasonable. The Second night we found a place named "O'Malley's Ocean Pub". This Hollywood restaurant was a hit and we enjoy the Oysters especially. Great deal too, they were only about $1/each.

At night we ventured out to Nikki Marina for some late night dancing. The atmosphere was good but the music was a little out date, and not in a fun 80's good way. After we found a place called "Purgatory" the fun meter really shot up, the music and atmosphere was great. It is a bit of a cab ride but it's worth it.
Source: The Hollywood, FL data and statistics displayed above are derived from the 2016 United States Census Bureau American Community Survey (ACS).
Loading