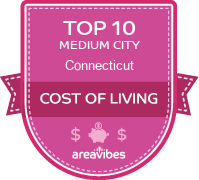 Best Places to Live in and Around East Hartford

See all the best places to live around East Hartford

If you’re considering moving to any new city, it could be a very intimidating task. However, it could also be a great experience if you are willing to get to know the town before actually living in East Hartford, Connecticut. With useful information like crime, weather, employment and other key data points, finding the best places to live in East Hartford and in the areas around East Hartford is a much easier task.

Based on the proximity of local amenities like grocery stores, restaurants, coffee shops, parks, librairies, etc., East Hartford has received a higher than average score for its local amenities. If you’re planning on relocating and making this area your permanent home, it’s nice to know that there is an ample amount of amenities and things to do within walking distance or a short drive.

East Hartford real estate prices and overall affordability will play a huge role in determining if the area is the right fit for you. Of course there are probably some other items on your “wish list”, but even before they are considered, let’s take a look at the home prices and affordability in East Hartford. The median home price for East Hartford homes is $163,300, which is 39.4% lower than the Connecticut average. If we take a closer look at the affordability of homes in East Hartford, we’ll see that the home price to income ratio is 3.2, which is 15.8% lower than the Connecticut average. Knowing if your home will appreciate on a long term or even a short term basis should be factored into your decision making. An increase in your home’s value can be a good way to generate tax-free equity that can create long term financial security. In the past year, appreciation rates for homes in the East Hartford area were 4.2% and 5 year appreciation rates were 1.1%.