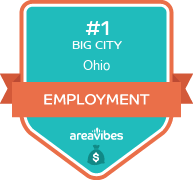 Columbus, Ohio is a large city with a population of 837,038 inhabitants. In Columbus, there are 3,829 people per square mile, which is well above the national population density average. The median age of all Columbus residents is 32, which is well below the national average. This is a good indication that this city could be ideal for young singles.

Are you trying to decide if living in Columbus is the right fit for your lifestyle? To ensure a positive experience before moving to any new city in Ohio, you will probably want to make sure that you check all of the most important boxes. Finding the best places to live in Columbus and nearby areas is a much easier task when you can rely on information and data from the livability score, which includes weather, education, employment and other important metrics.

With a livability score of 76/100, Columbus is ranked #4,463 in the United States and #428 in Ohio. This is a great score, as Columbus ranks well in multiple categories! If we probe a little deeper into each category within the livability score, we see that Columbus has higher than average scores for the following: amenities (A+), cost of living (B) and housing (A). Columbus does not do well for the following: crime (F) and employment (D). It might be wise to take a closer look at each category to find out why.

Based on the proximity of local amenities like grocery stores, restaurants, coffee shops, parks, librairies, etc., Columbus has received a higher than average score for its local amenities. If you’re planning on relocating and making this area your permanent home, it’s nice to know that there is an ample amount of amenities and things to do within walking distance or a short drive. Some of the interesting things to do and attractions include: Easton Town Center, Center of Science and Industry (COSI), and Fort Rapids Indoor Water Park.

The Columbus unemployment rate (0.78%) has continued to decrease over the years and is now well below the national average. Finding a new job in the area might just be easier than you thought!

Finding affordable real estate and apartments for rent in Columbus can be tricky. Having said that, this area might be the place to get the best of both worlds. Based on factors like home/rental affordability and appreciation rates, this area has received an above average score in the housing category.

Columbus real estate prices and overall affordability will play a huge role in determining if the area is the right fit for you. Of course there are probably some other items on your “wish list”, but even before they are considered, let’s take a look at the home prices and affordability in Columbus. The median home price for Columbus homes is $131,800, which is 0.1% lower than the Ohio average. If we take a closer look at the affordability of homes in Columbus, we’ll see that the home price to income ratio is 2.8, which is 7.7% higher than the Ohio average. Purchasing your new home can come with many financial benefits, some of which are more lucrative than others. Perhaps the most notable benefit could be the appreciation of your new home. Home appreciation rates are a good way to generate tax-free equity on a long term basis. The year over year appreciation rates in Columbus were 7.8%, and the 5 year appreciation rates came in at 9.7%.