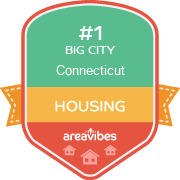 Without the right tools, relocating to any new area can be very stressful and challenging. Living in Bridgeport, Connecticut could be a good experience for anyone who puts in the effort to do the research required. Finding the best places to live in Bridgeport and nearby areas is a much easier task when you can rely on information and data from the livability score, which includes amenities, cost of living, employment and other important metrics.

With a livability score of 55/100, Bridgeport is ranked #27,416 in the United States and #138 in Connecticut. Compared to the US average, this city has a score which ranks among the lowest in the nation, and it is not considered a very livable city. Something also worth noting is that Bridgeport ranks among some of the lowest scoring cities in the USA, with more than 90% of cities obtaining a higher score. Based on the rankings for each individual category, Bridgeport has received high marks for amenities (A+). There are some categories that Bridgeport scores poorly for, including: crime (F), cost of living (D-), education (F), employment (F) and housing (F). It might be worth taking a closer look to find out why.

Conveniently located amenities and interesting attractions are a great way to continuously enjoy Bridgeport on a regular basis. Knowing that there are an abundance of amenities and things to do can ensure that you always have access to nearby grocery stores, restaurants and coffee shops. Here are some of the more popular things to do in Bridgeport: Beardsley Zoo, The Adventure Park at Discovery Museum, and Bridgeport Bluefish Baseball Club.

Assuming that Bridgeport meets all of your requirements, the next most important item to examine is the affordability of real estate in Bridgeport. Everything else becomes a lot less important if it turns out that home prices in Bridgeport are simply unattainable. The median home price for Bridgeport homes is $168,200, which is 37.5% lower than the Connecticut average. If we take a closer look at the affordability of homes in Bridgeport, we’ll see that the home price to income ratio is 3.9, which is 2.6% higher than the Connecticut average. Year over year appreciation rates for homes in the Bridgeport area were 7.5% and the 5 year appreciation rates came in at 5.5%. Why is this important? Knowing the appreciation rates for any area is a quick and easy way to determine if you will see a solid return on your investment.

Best Neighborhoods In & Around Bridgeport, CT

Attractions8/10
Community9/10
Nightlife4/10
Dining4/10
Shopping8/10
Bridgeport, CT is the largest city in Connecticut yet it is still quite small. I first visited the city on a school field trip years ago and late returned in 2009 with my wife. I was pleasantly surprised to see that Bridgeport had lifted its image and become a center for diverse and exciting activities from sports events to festivals!

Apparently Bridgeport, CT has over 2.5 million visitors a year which is something you would hardly notice when visiting. With such a large amount of tourism each person is sure to have their own opinion but for me I know one of my favorite locations in Bridgeport was a restaurant called Baldwin Plaza. Right in the middle of downtown off the main street is a beautiful, friendly and green plaza where you can go for a picnic, walk the dog or play Frisbee with the kids! Its a truly wonderful place where a certain harmony is achieved between visitors and residents of Bridgeport.

Bridgeport is filled with a wide variety of restaurant options although you will find the most readily available meal is seafood! Seafood makes sense since Bridgeport has the feel of a "Harbor Town" is very rich with its sea-faring past! Bridgeport would be perfect if there was a little more nightlife but unfortunately the city seems to sleep after 9pm; wich is great for families!
Source: The Bridgeport, CT data and statistics displayed above are derived from the 2016 United States Census Bureau American Community Survey (ACS).
Loading