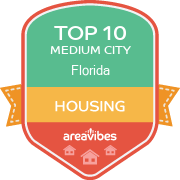 Best Places to Live in and Around Altamonte Springs

See all the best places to live around Altamonte Springs

Are you trying to ascertain if living in Altamonte Springs is the right fit for your lifestyle? To ensure a good experience before relocating to any new city in Florida, you will probably want to make sure that you check all of the most important boxes. With useful information like amenities, crime, weather, education, housing and other key data points, finding the best places to live in Altamonte Springs and in the areas around Altamonte Springs is a much easier task.

Based on the proximity of local amenities like grocery stores, restaurants, coffee shops, parks, librairies, etc., Altamonte Springs has received a higher than average score for its local amenities. If you’re planning on relocating and making this area your permanent home, it’s nice to know that there is an ample amount of amenities and things to do within walking distance or a short drive. Some of the interesting things to do and attractions include: Crane's Roost Park, Birthday World, and The Links at 434.

For buyers, real estate will be the largest purchase they ever make and it will also be their most valuable asset. For renters, the monthly rent paid on their Altamonte Springs apartments will most likely be their largest expense. Based on tangible metrics like home and rental affordability and appreciation rates, housing in this area has received a score that is well above the average of every other US city.