Celebrities have long endowed their offspring with distinctive monikers, and current Hollywood luminaries show no signs of bucking that trend. (The Kardashian family added Stormi, True, and Chicago to their fold in 2018.) But in recent years, the appeal of idiosyncratic naming seems to have reached the general public as well. Classic names such as John or Mary no longer number among the most popular, and parents are looking to unusual sources for alternatives. Media phenomena such as "Game of Thrones" can impact baby naming substantially: In 2017, American families welcomed 2,156 Aryas into the world – and 466 Khaleesis. For babies born today, unique names are quite common.

In this project, we pored over years of Social Security Administration data to analyze how naming trends have developed over the decades. From the return of vintage options (is Hazel poised for a comeback?) to the recent explosion in new name invention (we see you, Londyn), our findings provide both chronological context and current insights into American naming habits. Moreover, we've studied how naming trends differ geographically, observing the rise of particular names in various regions. Whether you're wrestling with what to call your child or wondering just how common your own name is, you won't want to miss what we uncovered. 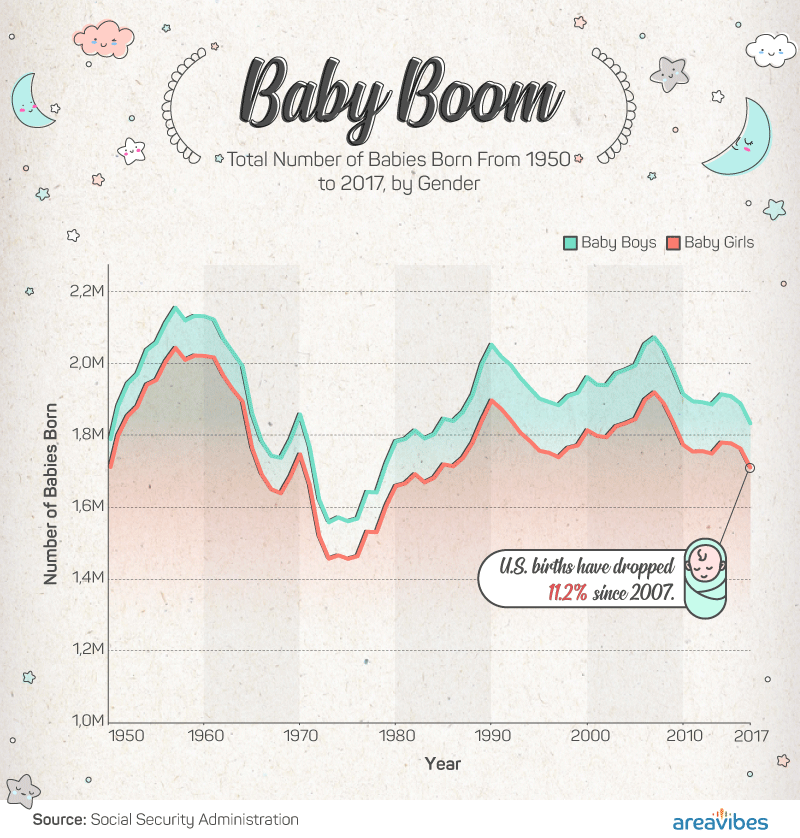 Before we dive into names both exotic and exceedingly common, it may help to gauge general childbirth trends in recent decades. After all, if a particular name surged in popularity during a high-birth period, it's likely to be disproportionately represented in the general population. It's hard to miss the baby boom bulge in the late '50s and early '60s, a phenomenon withmassive implications for the national economy – and forclassic names of that period, such as Susan and Cynthia. By the 1970s, however, birthrates contracted substantially from their post-war peak, falling to approximately 3 million babies annually.

The following decades saw birthrates rise on a relatively steady trajectory, with a particular spike around 1990 that some commentators attribute to economic confidence across the nation.Since 2007, however, the rate of childbirth has declined substantially, accompanied by historically low fertility rates. This trend is partially attributable to dramatic reductions in teen pregnancies, although some commentators suggest additional causes, such as limited support for working mothers. Whatever the case, some kid-centric businesses have hurt as a result of low fertility figures – analysts say the trend was instrumental in the demise of Toys R Us in 2018. 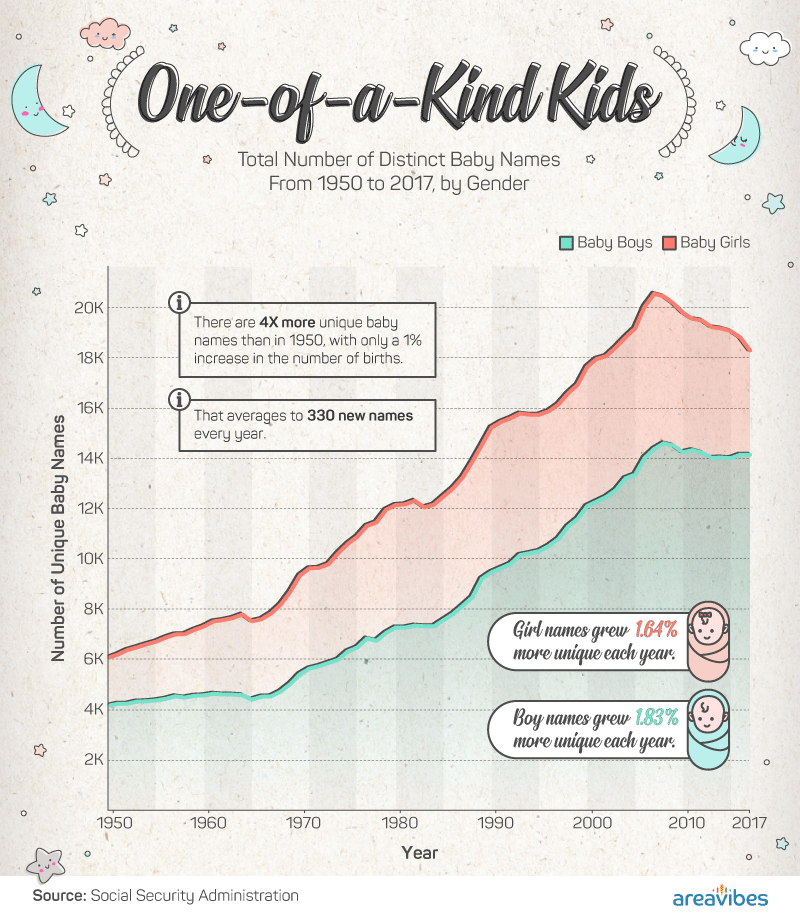 If birthrates have varied significantly over the past several decades, the rise of new baby names has been much more consistent. Our data indicate that an average of 330 new baby names were invented annually between 1950 and 2017, but unconventional naming is now far more common than in the middle of the 20th century. In fact, 2017 welcomed four times as many unique baby names into the world as 1950, despite the fact that the total number of infants born was roughly equal in those years. Relative to recent years, however, the distinct name trend seems to have cooled slightly. Just as births have declined since 2007, so too have new names dropped substantially.

Although more male babies are born each year, unique names are more often assigned to female infants. This pattern has endured since the 1950s and may reflect how our society's deeply ingrained gender roles affect the stakes of name experimentation. Indeed, scholars of American naming conventions suggest that parents are often afraid to give their male children names that might be perceived as feminine. Conversely, parents with female infants typically feel much more freedom in their naming decisions – even appropriating traditionally male names in many cases. 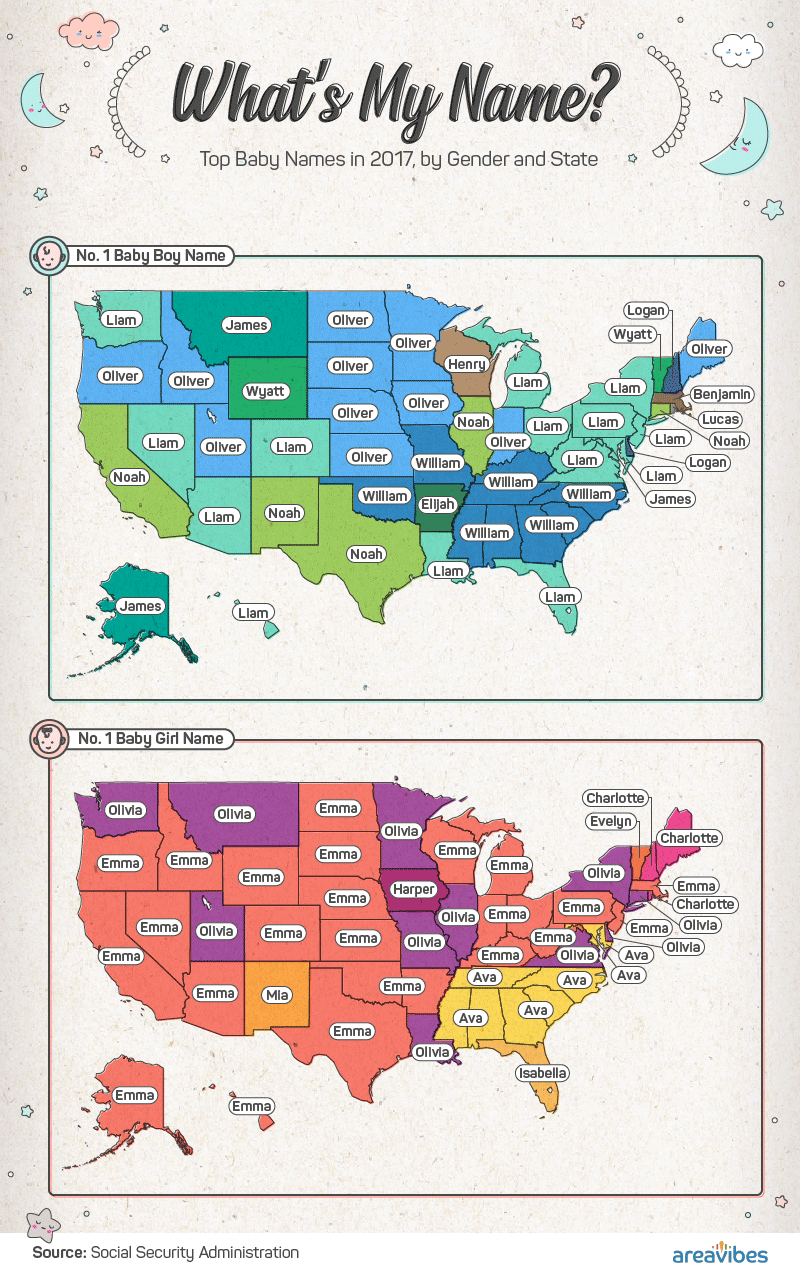 Call 2017 the year of "Emma-nation": In the majority of states, Emma was the most popular female baby name overall. The name's popularity isn't exactly unprecedented (it's been one of the five most common female names every year since 2002), but its cross-country appeal is quite impressive. Comparatively, other top female names seemed contained to specific regions, such as Ava in the South or Charlotte in the Northeast. Single-state outliers included Mia in New Mexico, Isabella in Florida, Harper in Iowa, and Evelyn in Vermont.

The top male baby names of 2017 consisted of several classics, including monikers with biblical origins (Noah) and some with royal roots (James and Henry). But the names that dominated most on a national scale were Oliver (also a top male name in the United Kingdom) and Liam. Some experts suggest Liam owes its popularity to its linguistic origins in Ireland: For Irish-Americans, the name may reflect cultural pride. Another top name for boys, Wyatt, may have received a bump in popularity from Ashton Kutcher and Mila Kunis – although the celebrity couple actually used it for their first-born daughter. 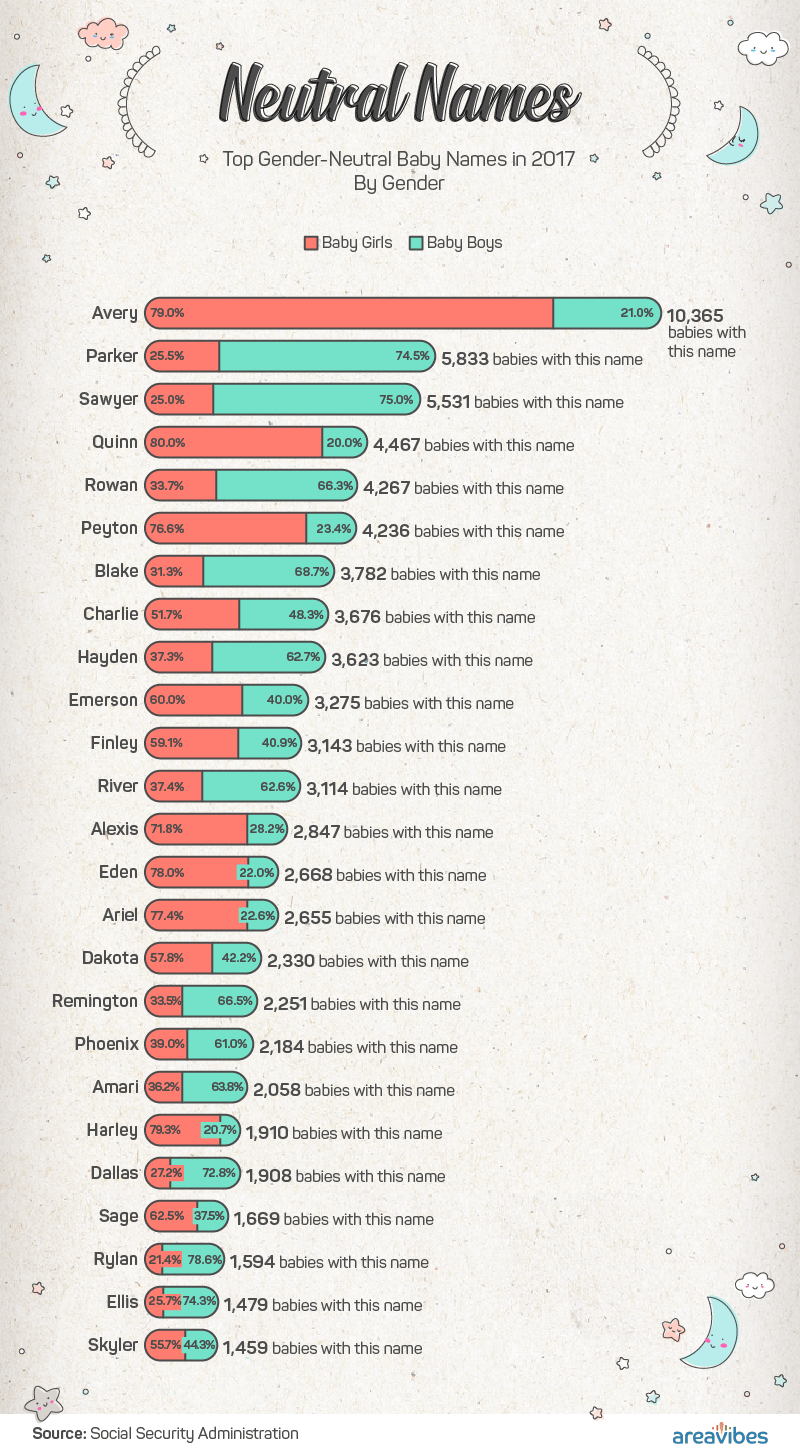 Of course, many names are not associated primarily with a single gender, and commentators anticipate these nonbinary names will only grow more common in the years to come. In this category, Avery was the most popular, although nearly 4 in 5 babies bestowed with this name were female. Quinn and Peyton offered a similar gender distribution: At least 75 percent of babies with these names were girls. The opposite was true for Parker and Sawyer, which were given mostly to male babies. You'll notice a recurring theme for many of these gender-neutral names: They are converted surnames, and thus free from long-standing association with either men or women.

Some names become gender-neutral options over an extended period, however: Charlie is now a predominantly female name, for example, albeit by a slim margin. Celebrities may influence shifts of this kind over time – experts note Dakota has gone decidedly female in the years since Dakota Fanning gained widespread fame. Nature and geography also offer valuable inspiration: River, Sage, Phoenix, and Dallas all numbered among the most popular gender-neutral names in 2017. 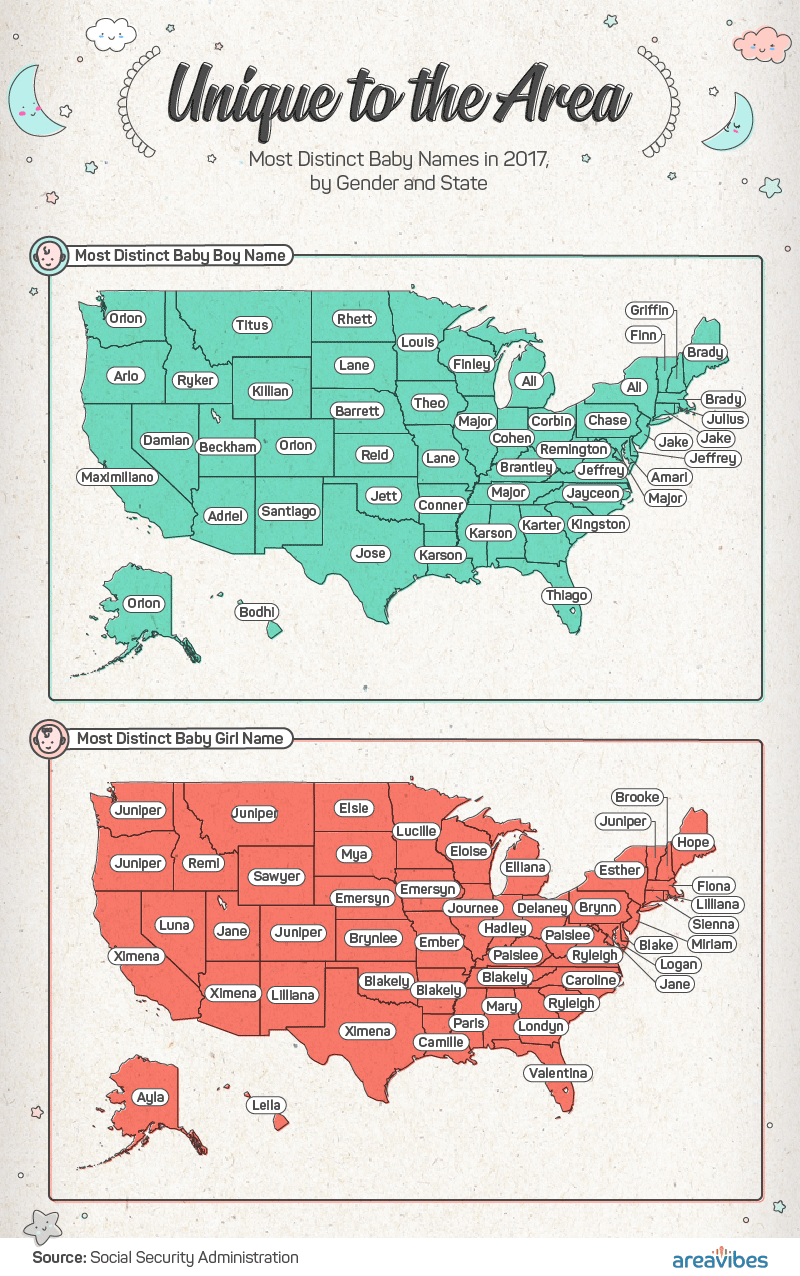 While they may not number among the most popular, certain names seem to possess special appeal in specific states. In some cases, these trends reflect the location and local populations: In border states such as Texas, New Mexico, and Arizona, names with Spanish origins were distinctly popular for girls and boys alike. Other states seemed similarly eager to replace an existing vowel with a "y" (Emersyn and Londyn) or do the opposite (Journee).Indeed, homophonic alternatives to common names were popular in many areas, but particularly in the South. In that region, options like Karter, Londyn, and Ryleigh flourished. And if you're even questioning New England Patriots fans' loyalty, look no further than Massachusetts and Maine, both of which disproportionately named baby boys "Brady" (likely) in honor of their starting quarterback.

Once again, nature was well-represented among creative names nationwide. Juniper, the most distinctive female name in multiple Northwestern states, is just the latest entry in a long tradition of borrowing titles from trees. Others turned to the constellations for inspiration: Orion was the most distinctive boy name in Colorado and Washington.Additionally, certain sounds simply seemed desirable in 2017. It's easy to hear what Blakely, Brynlee, Ryleigh, and Paisley have in common, just as Rhett, Jett, and Barrett possess phonetic similarities. 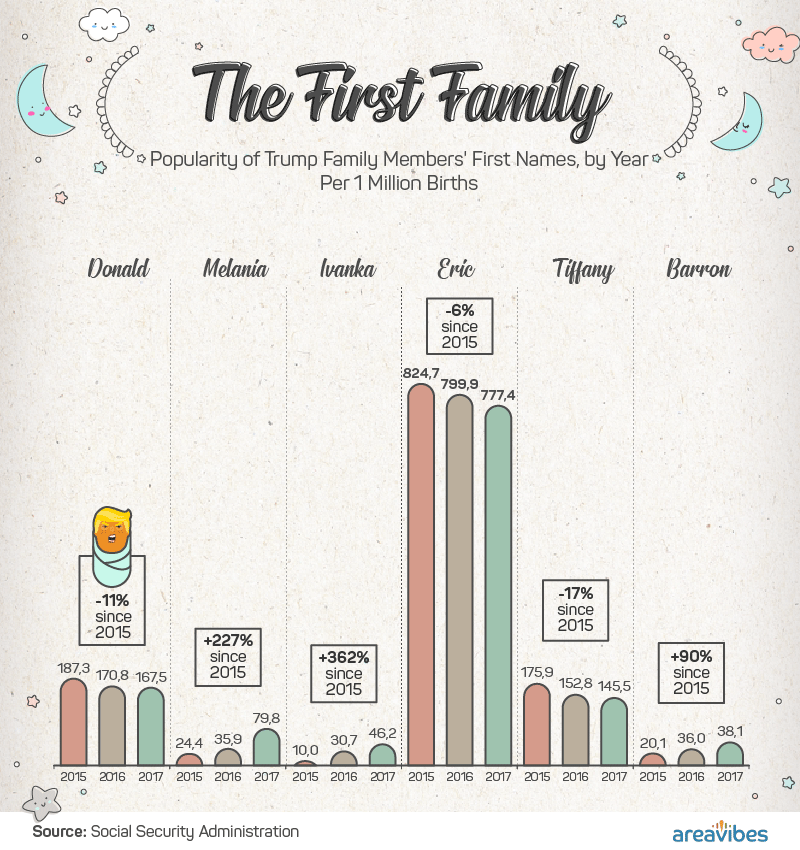 Do White House inhabitants see their names soar in popularity or suffer from association with the partisan dynamics of Washington? In the Trump family, at least, female names seem to do far better: While Donald and Eric have declined in popularity since 2015, Melania and Ivanka have spiked 227 percent and 362 percent, respectively. The first lady enjoys the best approval ratings among the general public, although Ivanka's approval rating has dropped since she assumed a role in her father's administration. Meanwhile, Barron was the only male Trump whose name enjoyed a boost during his father's presidency, increasing 90 percent from 2015, although his mom evidently refers to him as "Little Donald" on occasion.

A Timeline With Your Name On It

Percentage of Babies With Your Name, by Gender

Here's where our analysis gets interactive: Enter your name to see how its popularity has evolved. Or take the opportunity to draw interesting conclusions about how historical developments may impact the general public's taste in names. Consider the spike Hillary enjoyed in 1992 when the Clintons took the White House (and the precipitous drop in the name's popularity thereafter). Or check out how Donald fell out of popular favor in 1988 (the year after Donald Trump published "The Art of the Deal") and never recovered.

Prefer sports to politics? See how Tiger explodes once a certain golfer makes an unprecedented impression on the PGA Tour, or how LeBron takes off following King James' 2003-2004 rookie season. Additionally, gender considerations are fascinating in a historical context. Remember when we mentioned that most Charlies born in 2017 were baby girls? Since 1950, 79 percent of people with that name have been male.

What's In a Name?

If our findings prove anything, it's that no name is guaranteed to remain among the most popular for long. Indeed, parents seem to gravitate toward novelty and rarity, retrofitting names from decades past or inventing entirely new ones. Perhaps this urge to resist common options has a positive social function. Indeed, conversations about the origins of distinctive names often touch valuable topics, including the heritage and values individuals hope to instill in their children. In this manner, special names might incite opportunities to understand one another better – although we must engage respectfully with such a sensitive subject.

At its core, however, baby name selection is not a matter of service to society. Nor should parents feel pressured to impress others with their creative powers. Rather, choosing a name for one's child is a deeply personal process, and we must resist the temptation to judge when others make choices we would not. After all, whichever name parents choose, we wish the child who bears it well.

To compile the data shown above, we used the U.S. Social Security Administration's "Popular Baby Names" data. We examined the raw national and state-specific data of all names since 1950. The data present some limitations and caveats, all of which apply to the data shown above, most notably:

Because the data are restricted to only those names with at least five instances, total unique names and birth numbers may be slightly underestimated. For the map showing names most associated with each state, we limited names to only those with at least 1,000 babies born nationally with that name in 2017 to avoid hyper-specific outliers.

Do you or a friend have baby name conundrum on your hands? If so, you're welcome to share this project with your friends and family for noncommercial reuse. When you do, just link back to this page to give our team due credit. Plus, you could even shout out AreaVibes – you know, by name?