Want to move to your dream city? Trying to start a business and still get by? Still waiting on your career to take off? If so, you might want to consider living with roommates.

In fact, the number of adults living in shared spaces (outside of school) continues to climb. In 2017, roughly 79 million adults, nearly 32 percent of the U.S. adult population, lived in joint households, up from 27 percent in 2004.

There are plenty of things you should consider before sharing your home with someone else, like guarding the leftover pizza or making sure the bills get paid on time, but what about living with a roommate of the opposite gender? To find out how successful (or not) co-ed cohabitations are, we surveyed over 900 people living with someone of the opposite sex. Read on to see if the ups (like leftovers) outweigh the downs (like messy bathrooms) when men and women are living under the same roof.

In some scenarios, living with a roommate can be enjoyable (and possibly even beneficial). Beyond the obvious perk of saving money on rent, you can curb loneliness with the right person, and you might even have help with household chores.

According to both men and women, the best aspect of having a roommate of the opposite sex was when they cooked or left leftovers. More popular among women (82 percent) than men (74 percent), the advantage of having extra food was more valuable than having someone to watch TV with or share dating advice.

Still, the benefit of having added company wasn't far behind. Fifty-six percent of women enjoyed watching movies or TV together with their male roommates, and 49 percent felt the same way about listening to music. Forty percent of men and 37 percent of women also enjoyed getting to tag along with their roommates for girls or guys night out.

The Dark Side of Dwelling Together

Of course, for as many scenarios of co-ed roommates binge watching Netflix or partaking in a shared meal, some horror stories could convince to you live alone. Hoarders, neat freaks, party animals, and night owls might all make for a funny story, but they can be absolute torture to live with if you aren't on the same page.

Women were more likely to express frustration toward the sanitation of their opposite-sex roommates. Eighty-seven percent of women living with men resented roommates who didn't clean up after themselves in the kitchen, and 75 percent of men said the same about women not being mindful over the state of the bathroom or living area.

While what counts as clean and organized might vary from person to person, research suggests hazardous germs are twice as likely to appear in a woman's restroom than a man's. That's not to say women are the only guilty party, though. Despite 84 percent of women irritated by male roommates not cleaning up after themselves in the bathroom, putting down the toilet seat or cleaning up hair shavings can be a nuisance of their own.

The Cleanliness of Cohabitation 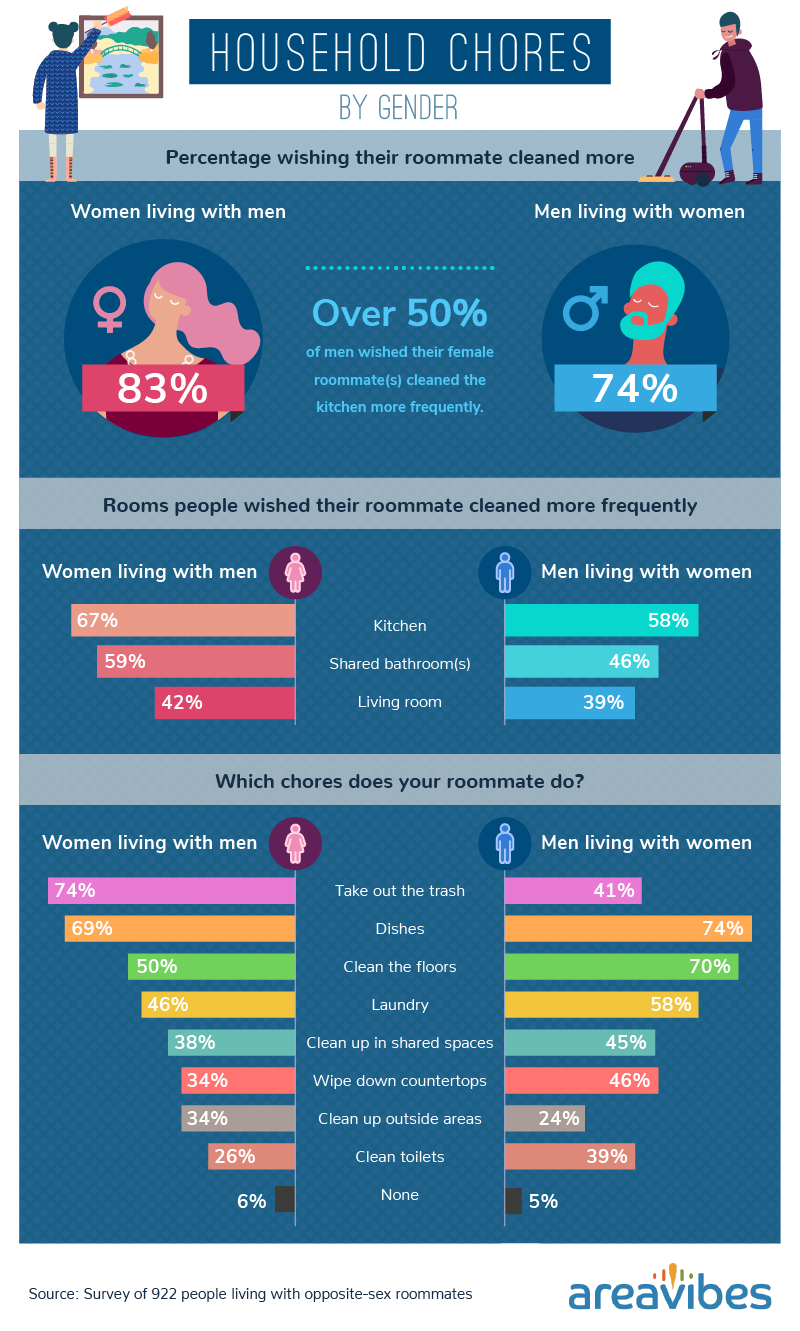 Some analysts suggest there may be a bit of a gender gap when it comes to keeping up with the housework, and that could extend to opposite-sex roommates as well.

Perhaps unsurprising given the disparity between the distribution of chores, 83 percent of women wished their male roommates would clean more often. Seventy-four percent of men said the same of their female cohabitants. 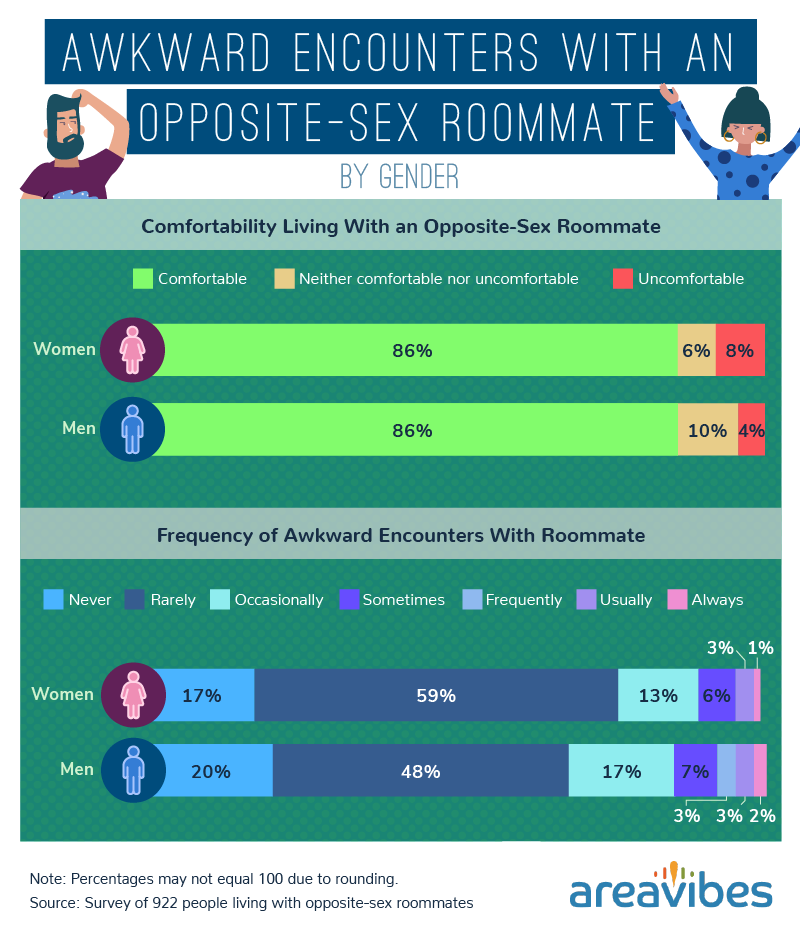 As with virtually any relationship, co-ed roommate situations have their ups and downs. While a majority of women wished their male housemates cleaned up more regularly, and most men wouldn't mind a cleaner (or more organized) bathroom, those strains usually aren't enough to sour the experience for most people. 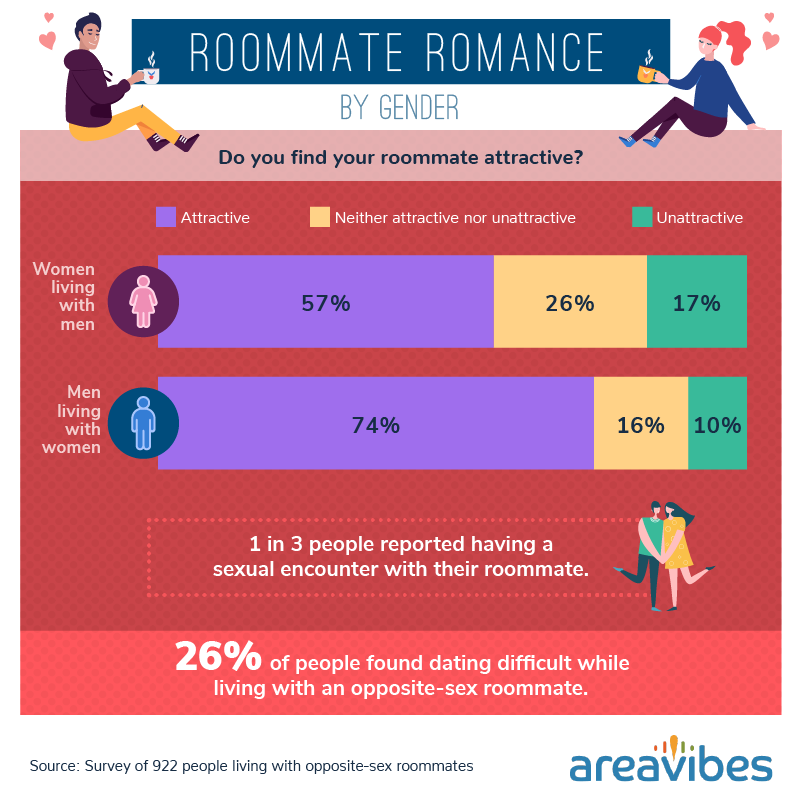 Regardless of what you've seen on TV, it is possible for men and women to be friends without crossing into romance or sex. In fact, according to one study, those friendships tend to last longer than same-sex relationships and may develop stronger bonds.

However, just because platonic relationships are real doesn't mean roommate situations can't turn into something more intimate. Seventy-four percent of men and 57 percent of women confessed to finding their opposite-sex roommate attractive. Despite 26 percent finding dating with an opposite-sex roommate difficult, 1 in 3 people reported having a sexual encounter with their roommate. 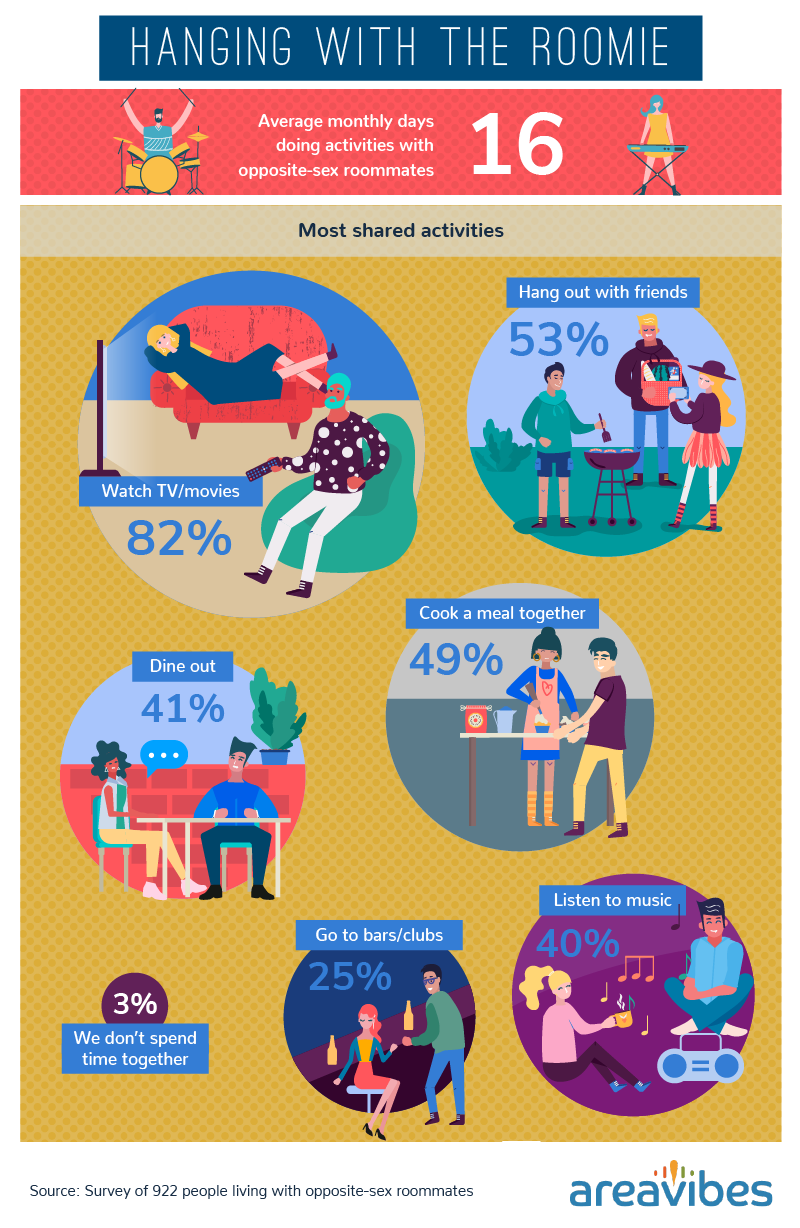 If you've ended up moving in with someone of the opposite sex, it's probably in your best interest to make sure you're compatible. On average, people living together spent nearly 16 days out of the month engaging in some form of activity.

For a majority of opposite-sex roommates, that involved watching TV or movies (82 percent), so you might at least consider swapping Netflix queues before signing a lease. Fifty-three percent said they hung out together with friends, while 49 percent cooked meals together and 41 percent went out to eat. If you want to make sure you're setting your living situation up for success, having a few friends in common or sharing a similar taste in food could be a good place to start. Only 3 percent of people living in a co-ed situation spent no time at all with their roommates. 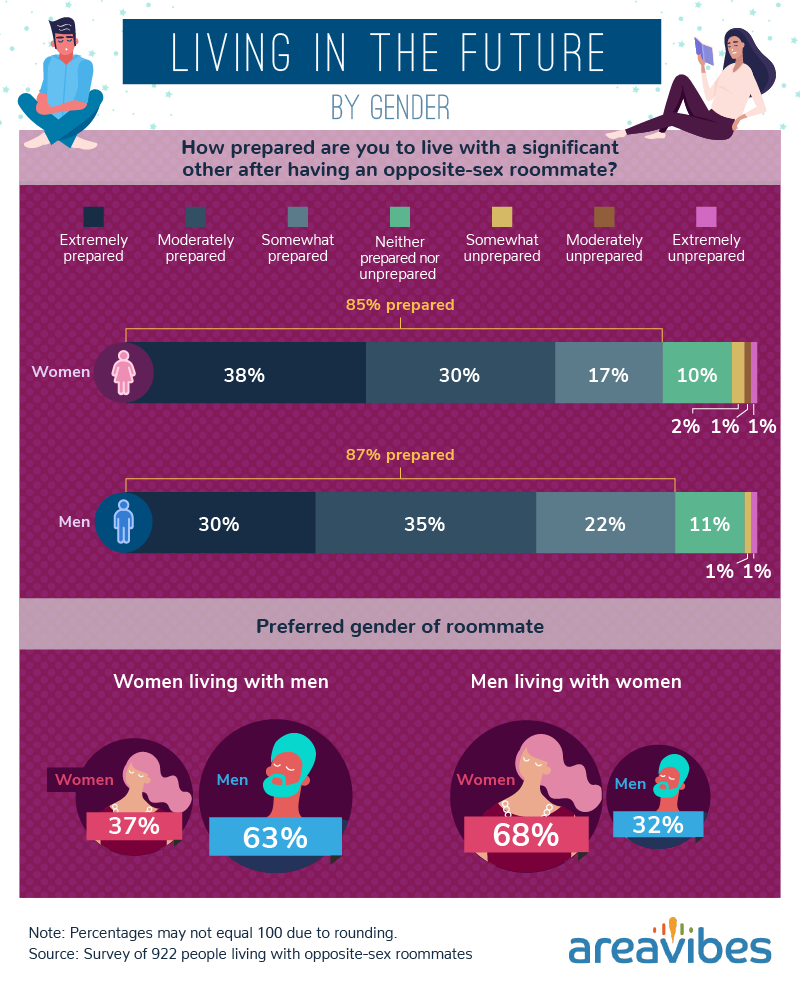 Not only were a majority of the people polled prepared to live with someone of the opposite gender, but many preferred living with a co-ed roommate. Sixty-three percent of women preferred to live with men as opposed to other women, and 68 percent of men preferred living with women as opposed to other men. Between 30 and 38 percent of people even suggested that sharing their space with someone of the opposite gender either extremely or moderately prepared them for living with a significant other.

Living with roommates always requires a little give and take, regardless if you're same-sex or opposite-sex roommates. There is something to be said for tackling a new adventure and pushing yourself outside of your comfort zone. Overall, people cohabitating with a member of the opposite sex would do it again, and they felt it prepared them for life with a significant other. However, it's important to remember that everyone's living situation is unique and what works for others may not work for you.

We collected responses from 922 respondents who lived with an opposite-sex roommate from Amazon's Mechanical Turk. 47.2% of our participants were men who lived with a female roommate (other than a significant other), and 52.8% were women who lived with a male roommate (other than a significant other). Participants' average age was 32.6 with a standard deviation of 9.3. Respondents who did not live with an opposite-sex roommate were excluded from participating in our survey and, therefore, were not included in the results. The data we are presenting rely on self-reporting. There are myriad issues with self-reported data. These issues include but are not limited to: selective memory, telescoping, attribution, and exaggeration.

Need help convincing your opposite-sex friend to move in with you? We encourage you to share the graphics and content of this project as long as they're for noncommercial purposes. Just make sure to link back to this page so that the authors receive proper credit.